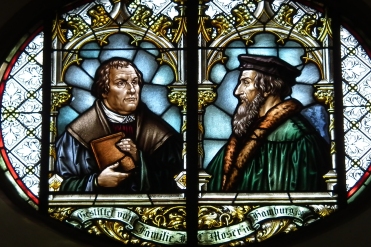 With the 500th anniversary of the Reformation (marked by Luther’s nailing of the 95 Theses to the Wittenberg door) approaching, there’s an increasing amount of celebration going on in Evangelical circles.

But Carl Trueman is a bit skeptical (which, given my respect for him, I tend to take seriously). It seems to him this may be celebration with much zeal that is unfortunately “not according to knowledge.” He wonders, “Evangelicals may well be remembering the Reformation in 2017, but what exactly will they be celebrating?”

The question is whether doctrinally-relativistic Evangelicals haven’t whitewashed the Reformers (with their passion for hard-edged, doctrinal-ecclesial distinctions) and simply recast them in their own image. In other words, have all you smiling Baptists stopped to think about why Luther thought you were a bunch of enthusiasts, or have you sanitized him and made him safe for generic Evangelical consumption?

This is a problem because if we launch into these “Evangelical jamborees” as an exercise in self-affirmation, we lose the opportunity for historically-informed self-reflection.

Now, so far as it goes, I think Dr. Trueman’s point should be heeded. Evangelicals do often tend to “bowdlerize” its saints to make them comfortable members of the local small group. We ought to be attentive to history for more than hagiography and self-affirmation.

That said, foolish, young man that I am, I have a few quibbles with the piece. Or more positively, I’d like to suggest a few reasons to ground Dr. Trueman’s hope that next year’s round of Evangelical jamborees will be “much more than that.”

I suppose I’ll focus mostly on this paragraph:

One waggish initial response is to ask what the Fathers at Nicaea might make of the broader “priorities and concerns” of the local Presbytery meeting in Philadelphia 1500 years later, (which would presumably also want to cling tightly to Nicaea’s confession).

More seriously, though, while it’s wrong to collapse the distance of 500 years by simply remaking it in our image, it also seems easy to ignore the possibility that some of the differences between modern evangelical faith and that of the sixteenth century Reformation are a legitimate development of that faith in response to those 500 years. In which case, yes, there’s still much to be dismayed over in contemporary Evangelicalism. But I think we ought to be slower to find it wanting according to the standards of its 16th century forebears.

While some might have qualms about calling it the “doctrine of standing or falling in the church”, it is a nodal doctrine that touches on a host of issues. All who affirm it must begin to approach each other on issues like imputation, atonement, the fundamentally gracious character of God, the nature of ecclesial mediation, and so forth (cf. Michael Allen’s Justification and the Gospel).

Another way of putting it is that sola fide begins to imply the other five solas as a whole. In which case, that celebration may include the recovery of a focus on the preaching and final authority of the Word of God, or the singularity of Christ’s priesthood, the rejection of the cult of saints, and so forth.

All of these are huge issues that even Evangelicals who disagree on some of the same issues the Reformers did (Lord’s Supper, Baptism), can still agree upon now, celebrate, and retrieve together. And this is even more so against a radical, secularizing culture, progressivism, or the inroads Roman Catholic or Eastern Orthodox apologists are trying to make among younger Evangelicals.

And now I speculate a bit: I wonder if Dr. Trueman’s confession that he is a “Reformed person who loves Luther more than Calvin” doesn’t have more than a little to do with his skepticism?

I’ll gladly cede to Dr. Trueman’s historical expertise at this point, but it seems Luther’s ecumenical style was a bit more bullish, and far less concessive than Calvin’s. Calvin thought Luther a great man, a latter-day apostle even. But Calvin (and a decent number of other Reformers) did not seem to follow him as a model in ecumenical matters. Indeed, he seemed to overlook the great man’s faults there.

Rather, it was Calvin who signed Augsburg. It was Calvin who tried to mediate between the Zwinglians and the Lutherans on the Supper on their commonalities, in order to present a more unified, strengthened Evangelical front in mission and in the struggle against the papacy. As doctrinaire as he could be, he seemed to possess something of a tactical relativizing streak when needed. What’s more, his confessionalism had ecumenical aims–in the preface to the Geneva Catechism, one of his chief stated reasons for presenting doctrine clearly is so that other churches might approve of it.

Obviously, I would be committing the very error Dr. Trueman is warning against if I tried to suggest that, without question, Calvin would fit right in on the podium at the next TGC “jamboree” or something. Then again, I suppose I wouldn’t rule out his showing up.

Yes, beginning with commonalities like justification by faith often can often be used to relativize differences in a bad way—the kind of way that thinks that just because we agree on justification, I should never tell my Zwinglian friend to allow Jesus to attend his own Supper.

Still, there does appear to be a proper “relativization” that confessing Nicaea, Chalcedon, and, yes, justification by faith, ought to have on that discussion—a relativization to its proper place within the whole structure of the faith. It is that sort of relativization without relegation makes recovering a proper appreciation for dogmatic rank such an important task. It’s that key tool in the toolkit that allows us to keep ecumenism properly confessional and confessionalism properly ecumenical.

There’s more to say than I can here. Obviously, I share his hope that Evangelicals will take this time to dig deep into Protestant history and do more than pat themselves on the back. I guess I’m just more sanguine about the prospects.

P.S. On this whole subject, Kevin Vanhoozer’s forthcoming Biblical Authority After Babel: Retrieving the Solas in the Spirit of Mere Protestantism is relevant on a number of these issues.

Leave a Reply to A Pilgrim Cancel reply