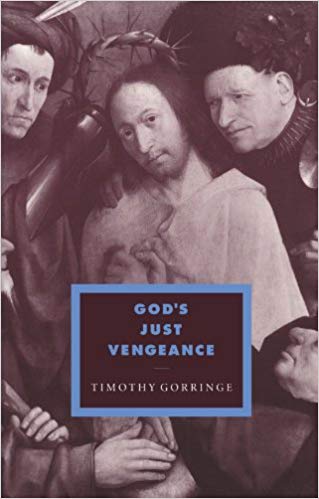 A few weeks ago, I touched on the matter of consequentialist logic in theology. One of my arguments was that we need to be wary about rejecting some theological premise just because we are used to seeing it attached to some inference, some conclusion we don’t like. That’s because folks can rightly or wrongly draw all sorts of conclusions from the very same premise, depending on what other premises they attach to it. Or how smart they are.

I ran across another good example of this in Timothy Gorringe’s volume God’s Just Vengeance. In a chapter on the atonement theology of the 18th century, he notes that it was the century of the “magistracy”, and if there was one universal across a variety of theological camps, it was the invocation of the image of God as the universal magistrate, the perfect, moral governor of the universe. But the theological conclusions of that shared premise when it came to atonement or the practice of justice were not always alike, depending on which other principles were invoked (is punishment rehabilitative, punitive, deterrent), or how analogous you took God’s magistracy to be with regular, human magistrates (very much, or not at all), or how highly you evaluated the ability of human justice to approximate divine justice.

The moral philosopher William Paley is a good example of the rather odd configurations you could get. Gorringe cites a long bit from his Principles of Moral and Political Philosophy (God’s Just Vengeance, 164):

A Being whose knowledge penetrates every concealment, from the
operation of whose will no art or flight can escape, and in whose hands
punishment is sure; such a Being may conduct the moral government of
his creation in the best and wisest manner, by pronouncing a law that
every crime shall finally receive a punishment proportioned to the guilt
which it contains … But when the care of the public safety is entrusted
to men, whose authority over their fellow creatures is limited by defects
of power and knowledge … a new rule of proceeding results from the
very imperfection of their faculties. In their hands, the uncertainty of
punishment must be compensated by severity. The ease with which
crimes are committed or concealed must be counteracted by additional
penalties and increased terrors.

Here we see that Paley believes God is a perfect judge and magistrate who is able (and willing) to administer perfect retributive judgment, giving every sinner his just judgment. So far, he’s got a basic retributivist outlook. Beyond that, God has entrusted the moral government of the world to those put in authority. Okay, makes sense.

The problem for Paley is that they are not perfect justices. They are finite, unable to discern the heart, the truth of a given case. And so, human justice must be carried out, not attempting perfect distributive or retributive justice, but rather with an eye towards either deterrence or rehabilitation. But since he thinks rehabilitation rarely works, precisely for that reason, punishment should err on the side of severity! Only by punishing crimes with great severity will you get folks to knock it off and promote peace. (This was during the years the Black Act under which something like 350 types of cases were liable to death penalty.)

While the logic is intuitive enough at one level, there are a couple of ironies to the position.

First, the common assumption is that his theological retributivism is what would make Paley more prone to harsh punishment. But the reality is the opposite. It seems that precisely because he did not take the retribution of God seriously enough, he did not take seriously the danger of facing the judgement of a God who equally hates convicting the innocent as well as acquitting the guilty (Prov. 17:15), or the punishment of a crime in a way that violates proportion.

(This is actually at the heart of C.S. Lewis’s famous defense of retributivism: all sorts of atrocities and infringement of liberty could be justified under the banner of deterrence or rehabilitation if nobody stops to ask the question of whether or not someone deserves such treatment.)

Second, the moral he draws from his epistemological judgment is suspect. One might just as well take the position that precisely because human judgment is fallible, weak, and imprecise, we must lean towards leniency in punishment.  If you don’t know if someone’s a murderer, don’t shoot ’em. But again, that only follows if you take retributivism seriously as a principle of judgment.

Again, though, a very different use of the image was made by others at the time. Socinians like Joseph Priestly agreed that God was a divine magistrate. What’s more, they agreed that his justice was perfect and different than that of finite human judges. But that precisely for that reason, he did not have to punish as they did. He could see human hearts and understand who was truly penitent and forgive them, unlike human judges who could not. So this theological leniency doesn’t necessarily cash out in practical, juridical leniency.

My point isn’t to settle the issue of which use of the image of the divine magistracy is the correct one (fwiw, neither of these two are good), but simply to illustrate again the fact that the very same images, principles, etc. can be used to come to very different conclusions. So we ought to be hasty in our evaluation that one necessarily causes damage or ought to be discarded.

Instead, what this variety reinforces for me once more is the need to let Scripture norm our concepts. To let God define for us, what it means to be King, Judge, and Father.