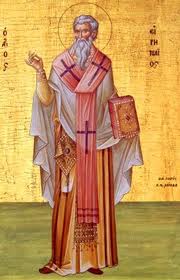 St. Irenaeus, Bishop of Lyons (2nd century C.E. – c. 202) was a stud for many reasons. First off, he was a theological beast. His multi-volume defense of the faith against the Gnostic teachers, Against Heresies, was probably the first real biblical theology in the post-Apostolic period and has deeply influenced Christianity, both East and West, ever since.  Aside from his theological beastliness, he stands out when it comes to faithfulness in ministry, taking up his bishopric right after the last bishop got martyred.

Sometimes I wonder what motivated the faithful obedience of men like Irenaeus–bravely taking up a pastoring job when, basically, the blood of the last guy who took the job was still fresh on the ground. What gave him passion? What gave him courage? What gave him the drive to follow Christ with such radical obedience and faith? It seems like that’s such a harsh demand, something too great for God to ask of anyone. If it were me, I might be tempted to ask, “Why do you need me there anyways? Why are you depending on me? What’s so important to you about my obedience?”

It turns out that Irenaeus probably would’ve rejected the question as confused.He knew something that a lot of us contemporary American Christians don’t: God doesn’t need your obedience–you do. I’ll let him explain:

In the beginning, therefore, did God form Adam, not as if He stood in need of man, but that He might have [some one] upon whom to confer His benefits. For not alone antecedently to Adam, but also before all creation, the Word glorified His Father, remaining in Him; and was Himself glorified by the Father, as He did Himself declare, “Father, glorify Thou Me with the glory which I had with Thee before the world was.”(John 17:5) Nor did He stand in need of our service when He ordered us to follow Him; but He thus bestowed salvation upon ourselves.

For to follow the Saviour is to be a partaker of salvation, and to follow light is to receive light. But those who are in light do not themselves illumine the light, but are illumined and revealed by it: they do certainly contribute nothing to it, but, receiving the benefit, they are illumined by the light. Thus, also, service [rendered] to God does indeed profit God nothing, nor has God need of human obedience; but He grants to those who follow and serve Him life and incorruption and eternal glory, bestowing benefit upon those who serve [Him], because they do serve Him, and on His followers, because they do follow Him; but does not receive any benefit from them: for He is rich, perfect, and in need of nothing. But for this reason does God demand service from men, in order that, since He is good and merciful, He may benefit those who continue in His service. For, as much as God is in want of nothing, so much does man stand in need of fellowship with God. For this is the glory of man, to continue and remain permanently in God’s service. -Against Heresies, IV.14.1

He says, God doesn’t need anything. I mean, seriously, think about it–he’s GOD. He’s had everything he needed from all of eternity within his own Triune perfection. He didn’t make Adam in order to serve him because he needed anything, but rather, he made Adam to serve him so that he could reward him with good. He says, “follow me” because following him leads to the life he already has in abundance. He continues on:

Wherefore also did the Lord say to His disciples, “Ye have not chosen Me, but I have chosen you;” (John 15:16) indicating that they did not glorify Him when they followed Him; but that, in following the Son of God, they were glorified by Him. And again, “I will, that where I am, there they also may be, that they may behold My glory;” (John 17:24). not vainly boasting because of this, but desiring that His disciples should share in His glory: of whom Isaiah also says, “I will bring thy seed from the east, and will gather thee from the west; and I will say to the north, Give up; and to the south, Keep not back: bring My sons from far, and My daughters from the ends of the earth; all, as many as have been called in My name: for in My glory I have prepared, and formed, and made him.” (Isa. 43:5). Inasmuch as then, “wheresoever the carcase is, there shall also the eagles be gathered together,” (Matt. 24:28) we do participate in the glory of the Lord, who has both formed us, and prepared us for this, that, when we are with Him, we may partake of His glory. -ibid.

God wants us to obey him because through obedience, we are conformed more and more to the image of his glorious Son. Jesus is inviting us to glorify God so that we might participate in his own glory. The point is, God doesn’t need our obedience due to some lack in himself (even though he righteously demands it and we owe it to him), but part of why he desires it is so that we might gain from it. He’s like a dad telling you to practice some sport, or some instrument, not because he’s going to personally gain from it so much, but because he knows you will. The glory, the beauty, the greatness that will follow that obedience, that discipline, no matter how difficult, is worth it and it is the aim of our God in his commands to us.

Once again, Ireneaus knew what so many of us don’t: We need our obedience far more than God does.

3 thoughts on “Irenaeus: “God Doesn’t Need Your Obedience–You Do””