Should Adam Have Atoned for Eve? 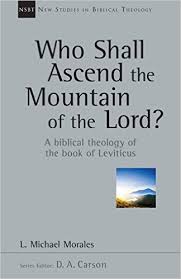 Reflecting on the nature of sin and desire in his Confessions, St. Augustine speculated that Adam sinned alongside Eve out of the bonds of natural human love. Eve was tempted by the Serpent and fell out of a lack of knowledge, but Adam knowingly chose to go down with her, since he could not bear to be parted with her. Reading Augustine’s account, we’re immediately sympathetic, recognizing the force of our bonds of love, whether married or not. My wife is “flesh of my flesh”, how would I not be drawn in with her?

Which raises an interesting question: what should Adam have done? To choose any created thing over God is idolatry. But what could he have done differently? Cut himself off from her? Let her suffer judgment alone in devotion to God? That also seems problematic for different reasons. Or maybe just difficult.

In any case, L. Michael Morales has a fascinating little excursus on the subject in his new book Who Shall Ascend to the Mountain of the Lord? A Biblical Theology of Leviticus.

But first, a word about the book. Leviticus is an oft-ignored book, shunted to the side in popular devotional reading and preaching largely because it appears to the book of arcane, pointless laws connected to the now-defunct sacrificial system. This is tragic because Leviticus is the heart of the first five books of the Bible and, in many ways, the heart of the story-line of the Bible.

Morales aims to open up the dense, confusing text by placing it in the broader story of the Scripture. Drawing on many of the advances in our study of the Ancient Near East as well as our undersanding of the narrative structure of Genesis, Exodus, and so forth, the sacrificial system of Leviticus stands as the answer to the question, “Who shall ascend to the Mountain of the Lord?” After our fall and expulsion from Eden and the presence of God, who will bring us back into his presence, into the House of the Lord? And how can we do so?

One of the key insights he builds on is the increasingly widespread recognition that there is a link between the Garden of Eden, the Mountain of God at Sinai, and the Tabernacle/Temple. Genesis 1-2, in differing ways, depict the creation of the world and especially the Garden as a cosmic house, the holy mountain where God himself intends to dwell. (I’ve listed 9 reasons the Garden was a Temple here).

In a sense, the two realities are mutually-informing. The Tabernacle and Temple both were to function as a renewed, miniature cosmos, with all kinds of creational imagery built into their structures. Much of the liturgy of the sacrificial system is aimed at restoring the relationship of worship and communion intended by God from the beginning. Honestly, I’m barely scratching the surface of all the various texts and theological problems this sheds light on.

Returning to the problem of Adam and Eve, one of the major takeaways from this recent Eden/Tabernacle connection is seeing the Priestly nature of Adam and the Adam-like nature of the High Priest. Humanity was created to be a priesthood within the Tabernacle of creation. The High Priest stands in the Tabernacle entering into the presence of God as a representative New Adam, of sorts, while the first Adam was an un-fallen high priest.

It is precisely here that Morales makes the suggestion that the text presents us with the possibility that Adam should have acted precisely as the priest he was, making atonement for Eve in his own self-sacrifice (181). While that can seem a bit speculative at first, Morales marshalls a number of arguments along that line, which I’ll briefly touch on.

First, Morales points out the priestly dimension to the reality of Adam and Eve’s “one-flesh” relationship. We have often missed how much of Genesis 2 points the priestly realities (gold, onyx, etc. are mentioned and just so happen to be material for the Tabernacle/Temple). Morales suggests that Adam naming the animals and recognizing that none are suitable helpers, none are ‘flesh of his flesh’, is at the heart of why it is not possible for the blood of bulls and goats can take away sin (Hebrews 10:4). This is at the heart of the repetitive nature of the Levitical priesthood which only finds its fulfillment i Christ. But at that point, unfallen Adam is flesh of Eve’s flesh.

Second, the fact of the matter is that throughout the Torah the theme of sacrifice or the attempt to offer self-sacrifice by Adam-like figures is fairly frequent: Noah offering sacrifice after the ark, Abraham and Isaac, Judah’s offer to take the place of his brother Benjamin, or Moses offering himself up after the Golden Calf incident. It’s certainly not out of place in a literary sense, then, and theologically it’s certainly not (182).

Finally, there is the point we’ve already made: Adam is the “archetypal high priest” in the holy of Holies of the Garden of Eden. If not him, then who? Morales goes on to say, “arguably, the original audience would have readily seen Adam’s omission” (182). Indeed, given the fact that the Second Adam came to give himself for his bride (Eph. 5), is too wild to think this could have been an option for the First Adam?

I don’t know that I’m settled on this interpretation. I wonder about issues like Adam’s presence at the time of Eve’s temptation and sin. Or whether he was responsible for driving the Serpent from the Garden even before that. But the suggestion it’s fascinating nonetheless. I know I’ll be mulling it in the future.

In any case, I hope this has whet your appetite to pick up Morales’ book. It’s really a fantastic bit of biblical theology that’s illuminating, not only for the way you read Leviticus, but Genesis, Exodus, and the whole story-line of Scripture.