1 And 2 Kings as Wisdom Literature 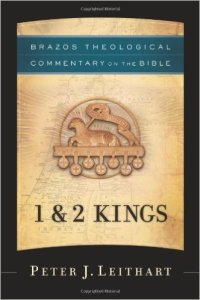 Over and over again, I’ve been convinced that the individual passages and books of Scripture only yield their full fruit when read in the context of the whole canon. If individual words take their meaning and nuance from whole sentences, sentences from paragraphs, and paragraphs in the sweep of larger arguments, then assuming the unity of the Scriptures, individual books can only take their full and proper meaning from being read against the rest of Scripture. Peter Leithart takes this even further, by showing the way that even the type of literature we understand a book to be shifts when set in conversation with the rest of  Scripture.

In his illuminating introduction to his Brazos commentary on 1 and 2 Kings–a clear example of biblical narrative if there ever was one–Leithart suggests that it can profitably read as wisdom literature along with Proverbs and Ecclesiastes:

The book of Kings can thus be fruitfully read as wisdom literature, albeit in a rather counterintuitive way. Proverbs describes wisdom as the way to life and prosperity: those devoted to Lady Wisdom are told that “riches and honor” as well as “enduring wealth and righteousness” come with her (8:18). According to Proverbs, there are stable patterns in the world, a moral cause-and-effect overseen by a just God, who rewards those who fear him. Yet, much of the wisdom literature of the Old Testament teaches an apparently contradictory message. Job is blameless in all his ways, yet suffers such excruciating loss that he concludes that Yahweh has abandoned him, and Ecclesiastes seems to directly challenge Proverbs with its recurring message that the wise and the foolish are both teetering toward the grave (Eccles. 2:14—16). Proverbs and Ecclesiastes are not contradictory, but rather highlight two poles of the biblical understanding of wisdom: if Proverbs teaches that Yahweh operates by a moral calculus, Ecclesiastes teaches that this calculus is as much beyond our grasp as Yahweh himself is, and as a result we experience the world as “vapor” (often mistranslated “vanity”) that slips away when we try to understand or control it.

The book of Kings might be read as a historical endorsement of the viewpoint of Proverbs. Good and faithful kings achieve unbelievable wealth and notoriety (Solomon) and are miraculously delivered from enemies (Hezekiah) (2 Kgs. 18-19). Bad kings brace themselves for stinging rebukes from prophets, die randomly in battle (1 Kgs. 22:34-36), and are devoured by wild dogs and scavenging birds (14:11; 2 Kgs. 9:36-37). Though the judgment of the wicked is doubtless a strong theme in 1-2 Kings, the overall effect of the narrative is the opposite, closer to Ecclesiastes than to Proverbs. Wicked kings are delivered as frequently as righteous ones: Ahab defeats the Arameans twice (1 Kgs. 20) before falling to a “chance” Aramean arrow, and Ahabs son also defeats the Arameans twice (2 Kgs. 6-7). Wicked Jehoash of Israel trounces righteous Amaziah of Judah (14:8—14), and Yahweh leads Israel in triumph over Aram during the reigns of Jehoahaz and the equally wicked Jeroboam II (13:22-25; 14:23—27). The book of Kings, especially 1 Kgs. 1-11, narrates the limitations of royal wisdom, while the book as a whole demonstrates the wisdom of Ecclesiastes, a wisdom that finds history elusive, unfathomable, uncontrollable. In its treatment of wisdom, then, 1-2 Kings is prophetic literature, demonstrating that wisdom is essential yet ultimately ineffectual to secure the health and salvation of Israel. –1 & 2 Kings, Brazos Theological Commentary on the Bible, pg. 19

One thought on “1 And 2 Kings as Wisdom Literature”