Two Tips for Preaching: Manuscript and Practice Out Loud 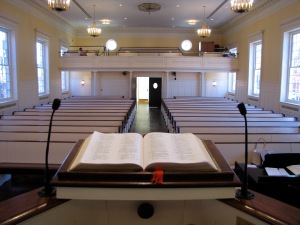 This week saw a damning broadside in The New Republic against famed scholar Cornel West, by his erstwhile friend, mentee, and notable scholar in his own rights Michael Eric Dyson. I’m so far from competent to weight the merits of the case going in either direction, it’s beyond pointless for me to comment. I found the article fascinating, as much for the argument and the drama, as the compelling insights into the nature of writing, the academic life, and, yes, their application to preaching and teaching in the pulpit.

In one section, Dyson goes after West’s apparent drop-off in scholarship. Apparently West hasn’t written anything by himself in years, and much of his work seems to be collections of spoken addresses, interviews, and conversations that have been transcribed and edited. So what’s the problem with this? Dyson explains:

In Brother West, West admitted that he is “more a natural reader than natural writer,” adding that “writing requires a concerted effort and forced discipline,” but that he reads “as easily as I breathe.” I can say with certainty, as a college professor for the last quarter century, that most of my students feel the same way. What’s more, West’s off-the-cuff riffs and rants, spoken into a microphone and later transcribed to page, lack the discipline of the written word. West’s rhetorical genius is undeniable, but there are limits on what speaking can do for someone trying to wrestle angels or battle demons to the page. This is no biased preference for the written word over the spoken; I am far from a champion of a Eurocentric paradigm of literacy. This is about scholar versus talker. Improvisational speaking bears its wonders: the emergence on the spot of turns of thought and pathways of insight one hadn’t planned, and the rapturous discovery, in front of a live audience, of meanings that usually lie buried beneath the rubble of formal restrictions and literary conventions. Yet West’s inability to write is hugely confining. For scholars, there is a depth that can only be tapped through the rigorous reworking of the same sentences until the meaning comes clean—or as clean as one can make it.

The ecstasies of the spoken word, when scholarship is at stake, leave the deep reader and the long listener hungry for more. Writing is an often-painful task that can feel like the death of one’s past. Equally discomfiting is seeing one’s present commitments to truths crumble once one begins to tap away at the keyboard or scar the page with ink. Writing demands a different sort of apprenticeship to ideas than does speaking. It beckons one to revisit over an extended, or at least delayed, period the same material and to revise what one thinks. Revision is reading again and again what one writes so that one can think again and again about what one wants to say and in turn determine if better and deeper things can be said.

West admires the Socratic process of questioning ideas and practices in fruitful dialogue, and while that may elicit thoughts he yearned to express anyhow, he’s at the mercy of his interlocutors. Thus when West inveighs, stampedes, and kvetches, he gets on a roll that might be amplified in conversation but arrested in print. It’s not a matter of skillful editing, either, so that the verbal repetition and set pieces that orators depend on get clipped and swept aside with the redactor’s broom. It’s the conceptual framework that suffers in translating what’s spoken to what’s written, since writing is about contrived naturalness: rigging the system of meaning to turn out the way you want, and making it look normal and inevitable in the process.

While I don’t find myself writing scholarly work every week–on top of my blog, or rather, before it–I’m usually spending a number of hours writing a couple thousand word manuscript on about 10-20 verses in order to preach them to about 20-odd students every Thursday night. On top of that, on Thursday itself, I’ll usually practice something like 4-6 times throughout the day as I prepare, before I ever get up to preach that night. The funny thing is, I’ve noticed that both parts of my sermon preparation are necessary for me. Dyson’s analysis of the different glories of the spoken and the written word speak to why.

Manuscripting of some form is absolutely necessary for me. The first draft is where I figure out the logical order, find most of my major points, craft certain key phrases, and make sure the flow is there. Without the outlining and manuscript process, I would not be forced to wrestle with the fundamental meaning of the text, and establish the bones, so to speak, before I put flesh on it. That said, if you look at my sermon notes and then follow my sermon, odds are that on any given night there’s going to be a major discrepancy between the two. Oh, sure, the sections are likely in the same order, the logic is there, and the paragraphs are mostly in place, but there is still wide variation from my initial draft to my final delivery. The reality is that as I practice throughout the day, I find myself following the text, but rewriting the sections as I go. Indeed, I end up rewriting it in my soul, since by the time I get up there, I’m barely looking at my notes anymore.

I know a lot of preachers hate practicing. The great thing about disciplining yourself to practice live before you go up a few times, is that you can begin to draw out those moments of improvisatory insight before you ever get in front of your people. And most preachers know that those are often your best points, right? By practicing, you take those flashes and work them into the structure of your sermon, dwell on them a bit more systematically, and draw out the implications with greater depth and persuasive power.

But I need both halves of the process. For those preachers who seem to hate preparatory manuscripting, you need to know that the best flashes of improvisatory insight come after you’ve already wrestled with the text for a while, written and rewritten sections, and tried to string it all together as best as you can on the page. Without that foundational work, your riffing will be less likely to be grounded in a fresh engagement with the text and more drawn on the leftovers of more studious days.

So those are my two tips: manuscript, then practice. I know every preacher is different, and plenty do it different, but if you’re young like me, or hitting a bit of a dry patch in your preaching, maybe consider giving it a try.

4 thoughts on “Two Tips for Preaching: Manuscript and Practice Out Loud”