Is the Old Testament Still a Source for Theology and Spirituality for Christians? 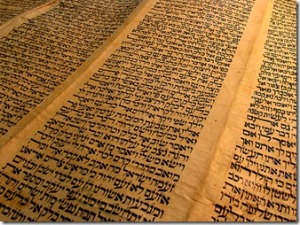 Does the Old Testament still matter for Christians? I think most of us have asked that question at some point. For many of us, the Old Testament is weird and scary, full of rituals that are foreign and irrelevant. Others of us wonder what the point of studying the Old Testament is now that we have Jesus and the New Testament. I mean, didn’t his coming make all of that pointless? Can’t we kind of move on and ignore it now?

Downplaying or denying the Old Testament’s importance or binding nature as revelation has been a perennial temptation for Christian theology. Looking at the ‘newness’ of the New Testament and the finality of Christ, some of us can only imagine that having a sense of abolishment and denial instead of one of fulfillment and completeness. This was true in the earliest church controversies into much later periods such as Francis Turretin’s own time.

Apparently, some Anabaptists denied this, and so Turretin took up arms to defend the Old Testament, dedicating a lengthy question (Institutes of Elenctic Theology, Vol. 1, Q. 8) in his section on Scripture to establishing the continuing authority and authenticity of revelation of the Old Testament alongside the New Testament as part of the rule of faith and conduct for the life of the church. (Side-note: I’m not charging current Anabaptists with this, just stating Turretin’s position. So, if you are one, and this doesn’t apply, excellent!)

Regular readers of the blog will know that the unity of revelation in the Old Testament and New Testament is a theme that’s shown itself to be increasingly important for all sorts of issues. Again, then as now, some will deny the Old Testament’s authority in order to propose revisions in our concept of God, of salvation, and the nature of God’s Word. I figured it would be useful to trace out Turretin’s case here for future reference and present edification.

A couple of notes to begin. First, know that Turretin’s sections are referenced under questions and paragraphs indicated by Roman numerals. As I will be summarizing, I won’t bother much with page numbers but will stick to the section numerals to note the arguments he makes. I will also be paraphrasing, and at times, putting Turretin’s terms in my own language for clarity’s sake. Finally, I may not actually buy every argument he lays down. Still, there’s plenty of beef there.

Turretin’s Clarifications. Turretin regularly spends a few paragraphs clarifying what he is and is not arguing for, as that seems to be where much of the confusion on these issues happens. The question of the authority of the Old Testament is no different.

II. Turretin makes it clear that he is not arguing that the Mosaic dispensation or administration of the covenant in the Old Testament is still binding and authoritative for Christians. Christ has fulfilled it and abrogated it. And yet, that doesn’t rule out its use for teaching and instruction as to doctrine and revelation.

III. Turretin also wants to be clear that he is not denying that Christ clarified and reformed the law by correcting and completing it. He wants to argue that Christians can still look to the OT to help establish the rule of faith and life because, in essence, the “religion of Christ” is contained in the OT books of Moses.

IV. He’s also not denying that there’s a difference between OT and NT, or that the NT is much clearer on certain points than the OT. OT promises and types are fulfilled in the NT, and so are, therefore, more obvious. His point is that their principle of religion–revelation of God, salvation, and so forth–forms a unity and consistency such that they are still revealing the same thing, even if in a different form. In other words, if we’re proving doctrine about salvation, or arguing for a certain pattern of obedience, or teaching about God’s nature, quoting the Old Testament as authoritative is still fair game for Christians.

Turretin’s Case. Now we get to Turretin’s actual reasons arguing for his positions.

V. First, and most important, Jesus approved Moses and the Prophets and wanted people to listen to them for their salvation (Luke 16:29). Peter and the apostles follow him in this, so you know he wasn’t just talking to Jews (2 Peter 1:19). The light of the Old Testament is there, shining as a witness for all until the end of the age.

VII. Third, Paul explicitly says, “Whatever was written in former days was written for our instruction, that by steadfastness and the encouragement of the scriptures we might have hope” (Rom.15:4). Even though not every text applies in the exact same way, they all still have the same author in God, so they all have a place in the life of the believer, even if that place has shifted a bit.

VIII. Fourth, appealing to II Timothy 3:14 -15, Turretin points out that if the OT was good enough for Paul to tell Timothy, a minister of the Gospel, to ground his faith and conduct on it as he had since his youth (because the OT was the only Scriptures written when Paul was writing this) it seems reasonable to think it is good enough for us.

IX. Fifth, Jesus tells his Jewish opponents to go read the OT Scriptures because they speak of him (John 5:39). This is a command that assumes the OT will point them to Christ as the way to salvation. In which case, Christ obviously approves of it and thinks the substance of the OT is the same as that of his own message.

X.  Sixth, Turretin points out that the NT authors assume that the OT “contains the same substance of doctrine as the New, both with regard to things to be believed, and to be done, nor is any other gospel proclaimed today to us than which was formerly promised in the prophetic writings (Rom. 1:3; 16:25 – 26).” Paul preached the whole plan of God for salvation to Christians (Acts 20:26) and claimed that he was only saying what Moses and the prophets said (Acts 26:22). The command to love God and neighbor is just Deuteronomy all over again.

Answering Objections.  From there, Turretin sets out to making more clarifications and answering objections to his case.

XII. When Jesus says that the Law and the Prophets prophesied until John (Matt. 11:13), he isn’t talking about the permanence of the OT compared to the NT. You see, the two teach the same substance in different form. The first prophesies with types and shadows what is to come, the second proclaims clearly and plainly what has arrived. Jesus is saying that the OT as unfulfilled prophecy lasted until John, because now Christ is to be proclaimed as having arrived as that fulfillment.

XIII. Some charge that when Paul calls the apostles ministers of the Spirit, not the letter, he was talking about the OT (II Cor. 3:5 – 6). Here Turretin responds with some solid exegetical chops by saying that Paul is not talking about using OT in total as a document, which would be silly because he quotes it constantly. Instead, he’s talking about the movement from one covenant to the next, or one way of administering the covenant to the next. Still, he does acknowledge that “It is in many ways superior, not only because of its clarity and completeness, but also because of its efficacy, because it not only requires and commands duty as does the law, but also performs it through the law written in hearts by the Spirit.”

XIV. Turretin then points out that the incidental, or accidental form of implementing the covenant can change (sacrifices to the sacrifice of Christ, circumcision to Baptism, etc.), even when the internal meaning and substance is the same. He doesn’t deny the former, but affirms the latter.

XV. Next, he addresses the abiding value of the OT ceremonies. He points out that just because we don’t have to observe OT ceremonies anymore because they’ve been fulfilled in Christ, that doesn’t mean they’re not still instructive or useful to us to meditate on. By connecting the dots between the OT shadows and their NT substance, or the promises of the OT and their fulfillment in the NT, believers can still learn, grow, and be blessed by studying the Law and the Prophets.

XVII. While the NT has a full and complete revelation of Christ, in one sense, in another it does not. You can only see Christ as the fulfillment of the promise (NT), only if you’ve first seen Christ as promised (OT). In that sense, the perfection of the NT witness is dependent on the perfection of the OT witness. Removing this dimension to Scriptural truth removes a deep comfort and strengthening of a believer’s faith.

XVIII. In one of the most theologically-interesting bits, Turretin notes that only things that come directly, or indirectly, from Christ have authority for Christians. Well, contrary to what some might think, the OT has that. “But the law that was given by Moses was also given by Christ; by Moses as servant (servus), by Christ as Lord.” Turretin then argues that according Acts 7:38 the angel who appeared to Moses in the desert and on Mount Sinai, was the Angel of the LORD, the angel of the covenant and the presence, who was YHWH himself. We should see this figure as the preincarnate Christ himself, in which case Christ is the “primary author and promulgator of the Law”, and Moses was just a minister of it. In which case, the OT is binding.

XIX. For those of you wondering about that phrase “Christ is the end of the law”, it doesn’t mean he has put it away and done away with it. It means he is its goal, its “telos”, its “end”, in that he has fulfilled it by obeying it, completing its purposes in his life, death, and resurrection. Also, by writing it on the hearts of his people so they can walk in it as well. Finally, we must remember that he himself said he came to fulfill the law, not abolish it (Matt 5:17).

XX. Servants that contradict their masters should be ignored, but if they keep it, we should hear them. ” Moses and the prophets did this no less than the apostles (John 5:46; Acts 10:43), and Christ expressly enjoins the hearing of Moses and the prophets (Luke 16:29). This is not going back from Christ to Moses, but a going forward from Moses, who is a tutor (Gal. 3:24), to Christ.”

Conclusion. To sum up, then, I think Turretin’s case holds up in the main. What’s more, many of Turretin’s lines of argument from Jesus’ and the Apostles’ use of the OT could be expanded upon at length. Christians can and ought to consider the Old Testament a valid source of doctrine and spirituality, even if we acknowledge the great clarity of the New Testament, and take care to note the way the shift in covenants changes our relation to it. It is God’s word of revelation to us, “breathed out by God and profitable for teaching, for reproof, for correction, and for training in righteousness” (2 Timothy 3:16).

Let us graciously and humbly receive it as such.