Is It Possible to Be Too Christocentric? Vanhoozer on Christomonism and the OT 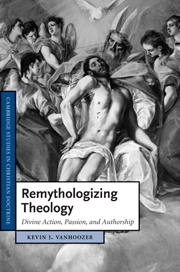 Part of Kevin Vanhoozer’s project in his massive work Remythologizing Theology is developing a method of moving from Scripture to theology, especially with respect to a properly gospel-centered doctrine of God. Roughly, the idea is to get from the narrative (mythos) of God’s “theodramatic” doings in redemptive history and derive a metaphysic, an account of God’s being (or being-in-act), that takes its cues and categories from that, instead of speculative philosophical categories (re-mythologizing = re-narrativizing). It asks, “what this ‘who’ is like – on the basis of what God says and does?” I’ve tried to summarize Vanhoozer summarizing himself here.

Vanhoozer examines Karl Barth’s approach in the process–one that informs his own at various points–to see its strengths and weaknesses, and set it up as a sort of foil for his own project. Barth clearly wants to speak of God on the basis of God’s own self-revelation, the Word we see uttered in the history of the Godman Jesus Christ. For Barth, God is who he is in the act of his revelation. To speak of his attributes is to speak of God’s divine activity. Still, Vanhoozer notes that there are a number of questions to be raised about Barth’s approach:

Yet questions remain: (1) Is God who he is apart from his act – his lived history in Jesus Christ – as well? It is one thing to say that God is in se the one who loves in freedom, quite another to say that God only becomes who he is – the one who loves in freedom – thanks to his self-actualization as Word become flesh. (2) If God is who he is in the history of Jesus, how are we to distinguish deity from humanity, divine loving-in-freedom from human loving-in-freedom? (3) Does Barth do justice to the idea that “the personalizing of the Word does not lead to its deverbalizing” if, as Wolterstorff thinks, he regards the Incarnation as God’s sole illocutionary act? [DZR: ‘illocutionary act‘ = act of revelation]

These three questions resolve into one: can Christian theologians ever be too christocentric? Usually Barth’s critics worry about his tendency so to emphasize the work of Christ that it reduces the significance of human action. The present concern moves in the other direction, however, questioning Barth’s tendency to let the work of Christ reduce the significance of other instances of divine action: Why must we equate God’s being-in-act exclusively with God’s revelation in Jesus Christ when the Bible depicts God as in-act at other points of the biblical narrative as well?

Barth resists christomonism inasmuch as he accepts the witness of the Old Testament. Yet does he show sufficient awareness that without Israel’s Scripture we would lack the right interpretative framework with which to understand the event of Jesus Christ? More pointedly: without a prior revelatory rather than merely religious (i.e., man-made) framework, the event of Jesus Christ would ultimately be unintelligible. We must therefore press for greater clarity: is there nothing we can know of God prior to christology, on the basis not of speculative metaphysics but the mythos of Israel’s history with YHWH? Does YHWH’s activity in ancient Israel (not to mention the Ten Commandments and other texts that purport to be direct divine communication) count for Barth as divine revelation or not? Are there not events in Israel’s history in which one catches glimpses of God’s being-in-act?

Vanhoozer goes on to wonder if Barth works a christological doctrine of simplicity, whereby God is defined solely by the narrative of the life of Jesus and nothing else. But there seem to be some problems with that:

Yet it is difficult to see how he can derive a complete list of divine attributes by analyzing the life of Jesus alone…For example, is God essentially related to the world, or is the world the result of God’s free (and hence contingent) choice? It is also difficult to see how Barth can demarcate divine from human attributes from the history of Jesus alone inasmuch as it exemplifies both “true humanity” and “true deity.” To be sure, Jesus’ taking on human flesh and laying down his life for many speaks volumes about God’s love, but what about Jesus’ sleeping ( Mk. 4:38) or increasing in wisdom and stature ( Lk. 2:52)? Is every moment in Jesus’ life equally essential to God’s being?

What’s more, given what he says about the humanity of the biblical witness, which doesn’t truly become revelatory until God takes it up to confirm what he has said through Christ, it seems we’re in a bit of revelatory bind. This is why Vanhoozer later says:

Barth is clearly a kindred remythologizing spirit…Yet we have wondered whether Barth takes the biblical depictions of divine speaking seriously enough. Is the knowledge of God such that everything can be derived from his single incarnate illocution? By viewing Jesus Christ as God’s singular speech act, does Barth inadvertently demythologize the biblical accounts of God’s speaking by refusing to take them literally, that is, as ascriptions that render an agent?

While there’s a lot more going on, and I’ve probably botched the summary sections, you can start to see the problem with a particular way of being “christocentric”–it ends up being not so much christocentric, but christomonistic. In focusing on the ‘Word’ uttered in Christ, he relativizes and doesn’t seem to have a place for the words that set up and help disambiguate that Word.

Where am I going with this? I’ve seen people complain recently that Evangelicals and other typical Christians have too long let the OT define Jesus rather than letting Jesus redefine the OT. And I can see that. I’m all for reading the whole OT as pointing to and finding its ultimate meaning, resolution, and clarity in the revelation of the Incarnate Christ in the New. Still, while this is not exactly what’s going on with Barth, you can start to see some of the same problems emerge in those ‘christocentric’ accounts that place so sharp a distinction between the life of the Incarnate Christ, and the OT that forms the revelatory background for the Word God speaks through His Son.

In my best Vanhoozer, then: Christ is the center of the action to be sure, the climactic act and dramatis personae who explains and gives meaning to the whole drama of redemption. But he doesn’t step onto an empty stage. The earlier acts of the drama between YHWH and Israel recorded in the Old Testament are what form the necessary background to understanding Christ’s lead role. To write off the earlier acts as parochial, confused, or semi-inspired testimonies of a backward religious age, actually ends up undermining our ability to see the way Christ’s redemption resolves the various dramatic tensions at work in the plot-line of God’s relationship with Israel, and impugns the artistry of the Divine Playwright.

10 thoughts on “Is It Possible to Be Too Christocentric? Vanhoozer on Christomonism and the OT”