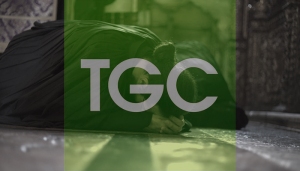 This is the photo Martini had. I give him credit. Also, I wanted to make sure people could link the two articles. Also, how many people actually read image captions? Show of hands?

Some of you know there’s been a bit of a brouhaha over the issue of sanctification in online Reformed circles in the last couple of months. It’s what led to the departure of Tullian Tchividjian (henceforth TT, because who can spell that?) from TGC and other unfortunate online ugliness. Basically, the dispute was surrounding a number of issues like, what role the law continues to have in the life of the believer?, or how necessary is obedience after conversion?, should we focus on obeying  or getting used to our justification, and stuff on that order. Kevin DeYoung’s summary article “What We All Agree on, and What We (Probably) Don’t, In This Sanctification Debate” is probably the best orientation to the subject. Also, his follow-up piece “The Grace that Saves Is The Grace That Leads You Home.” Also, the Mere Fidelity boys and I chatted on the subject about a month ago as well.

Well, recently Gabe Martini gave what he called an “Orthodox Commentary“, as in Eastern Orthodox, on the whole debate. He opened up with a lengthy, decently fair-handed summary of the dispute between the two sides, and then offered up a sort of Orthodox alternative. Essentially, Westerners of all stripes, and especially Protestants, have their categories all goofed up because of their fixation on ‘legalistic’ concepts of merit, earning, judgment, and so forth. Because of that, there’s a tendency to swing back and forth between moralism/legalism to the tendency to question whether obedience is required at all. Instead, with the Orthodox, we should see that it is indeed required, but we need to think through the basic form that obedience takes: repentance.

And for Orthodox Christians, that life of obedience is a life of true repentance. One where even the holiest saints end their lives with sorrow: the apostle Paul as the “chief” of sinners, and St. Sisoes the Great who desired yet another day to repent.

Through repentance we cooperate with God in our transforming sanctification leading unto the deification of looking like Christ. I won’t summarize it all. Again, you can go read it here.

I have to say, all in all, I appreciated the article. Martini was remarkably fair, which is not something I see a lot from Eastern criticisms of Protestants/Western theology. What’s more, for reasons that will become clear shortly, his call to repentance was, mostly, something I could get behind. Still, I had a couple of Reformed caveats and clarifications I’d like to offer up, for the sake of mutual up-building and understanding.

Union with Christ and Reformed Salvation

The first comment I’ll make, and it’s really the biggest, is to note the surprising absence of any discussion of the doctrine of ‘union with Christ’ in Martini’s article. Actually, it’s both surprising and not surprising. On the one hand, it’s not surprising because in many popular discussions of Evangelical and Protestant understandings of salvation, it’s been ignored for the last 50+ years. To some degree, when I see a non-Protestant ignore it, well, so many Protestants have that it’s hard to blame them.

That said, the doctrine of union with Christ is arguably the heart of a Reformed doctrine of salvation (including both justification and sanctification) dating back to Calvin himself, through Berkhof (whom Martini quotes), all the way through modern treatments like those of J. Todd Billings, Marcus Johnson, Robert Letham, or Michael Horton (all of whom have released titles on the subject in the last 7 years). You can’t, therefore, talk about the problem with Protestant approaches to salvation without dealing with it. It’d be like talking about omelettes without mentioning eggs. Beyond that, it was explicitly at the heart of so many of the TGC/TT debates, so that if you’re going to comment on them, it seems like a big absence.

Now, for those of you still confused as to what the doctrine of union with Christ actually is, and what it looks like in a Reformed theology of salvation, I’ll quote Robert Letham at length as he discusses Paul’s understanding of the issue:

If, because of one man’s trespass, death reigned through that one man, much more will those who receive the abundance of gracee and the free gift of righteousness reign in life through the one man Jesus Christ. (Rom. 5:17 ESV)

Here Paul reflects on his previous statement of the one way of salvation from sin by the propitiatory death of Christ, which avails for all who believe (Rom. 3:21ff). Justification is received only by faith and is grounded in what Christ did once for all in his death and resurrection (4:25).  Paul’s point is that we are not addressed merely as discrete individuals; instead, we are a team of which we all were members. His sin plunged the whole team into sin, ruin, death, and condemnation. What Christ did for us was also done as the head of a team of which we are a part. He did it on our behalf, for us–and God reckons it to our account as a result of our being united, through faith, with him as the head of the team. Our justification is therefore grounded on union with Christ.

In Romans 6:1ff, in answer to charges that his gospel encourages moral indifference, Paul insists that believers, the justified, live to Christ and do not give themselves over to sin.  This is because they died with Christ to sin and rose again to new life in his resurrection. Not only did Christ die and rise again for them, but they died and rose with him. Union with Christ is the foundational basis for sanctification and the dynamic force that empowers it. As Paul says, “Do you not know that as many were baptized into Christ Jesus were baptized into his death; we were buried with him through baptism into death, so that as Christ was raised from the dead through the glory of the Father so we too should live in newness of life” (6:3-4).

—Union with Christ: In Scripture, History, and Theology, pg. 5-7

Union with Christ, then, does a lot of work in the Reformed (and Pauline) view of salvation, and it’s the answer to a number of Martini’s critiques. For one thing, Martini talks about the place that double-imputation plays in the Protestant system (Christ is reckoned as sinner in our place and we are reckoned as righteous because of him), but, because he doesn’t note that union with Christ is the structure underlying traditional formulations of double-imputation, he resorts to the old charge of calling it a ‘legal fiction.’ What he misses is that in Reformed thought Christ takes responsibility for our sin on the cross as our covenant head and representative, and can really do so, because through faith we are united to him in that kind of relationship. What’s more, we can be included in his righteous status because, through union, we really are part of his body, his people. As N.T. Wright says, in biblical thought, what is true of a king is true of his people–therefore, what is true of Messiah (Christ) is true of the people united to him.

There’s more to say there, but I’ll leave it at that.

Also, you can see now how this plays into the sanctification debates. Union with Christ means that I’m organically connected to Christ and have been given the vivifying, sanctifying Spirit. I have been set apart definitively, and now, through the power of the Holy Spirit, I am empowered to chase holiness in obedience to God’s commands so that I might be continually conformed to the Image of the Son. Actually, this is the sort of dynamic that has caused theologians like Billings, Letham, etc. to note possible overlap with Eastern Orthodox conceptions of deification (as long as the proper Creator/creature distinction is maintained.)

So, ya, union with Christ is massively necessary to the discussion.

The second point is much shorter. Martini calls for a refocus on the shape of sanctification in this life, which is repentance. Now, aside from the little discussion we could have about the words ‘synergism’ and ‘cooperation’, which have their place in Reformed systems when properly understood, I don’t see a lot there that classic Protestants would disagree with. I mean, he quotes St. Isaac of Syria as saying, “This life was given to you for repentance; do not waste it on vain pursuits.”

Funny enough, St. Martin of Beeria (Martin Luther) opened up his famous 95 Theses with this line: “When our Lord and Master, Jesus Christ, said “Repent”, He called for the entire life of believers to be one of repentance.” Though Reformed types look mostly to Calvin, Knox, Bucer, & Co. I don’t think any of them would object that statement. In fact, Calvin himself says,

“This renewal, indeed, is not accomplished in a moment, a day, or a year, but by uninterrupted, sometimes even by slow progress God abolishes the remains of carnal corruption in his elect, cleanses them from pollution, and consecrates them as his temples, restoring all their inclinations to real purity, so that during their whole lives they may practice repentance, and know that death is the only termination to this warfare.” (Institutes, III.3.ix)

Passages like that could be multiplied ad nauseum in Calvin. I mean, he was the theologian of the Holy Spirit. That some of his heirs may have forgotten this emphasis, doesn’t change the fact that this sort of thing is deeply-rooted at the heart of Reformed spirituality.

In conclusion, I know I haven’t addressed the ‘legalistic’ charge. I may some time in the future because I think it largely without merit (Eh? See what I did there?). Still, I guess what I’d like to say is, Gabe, while we probably have some major disputes about merit, grace, atonement, and so forth (and that’s okay, I forgive you), when it comes to repentance and sanctification, we’re actually not as far off as you seem to think we are.

P.S. For a few more resources on union with Christ, I’d suggest Todd Billings’ book ‘Union With Christ‘, Robert Letham‘s by the same name, and Marcus Johnson’s new work One with Christ.

Also, I attribute my inspiration for this to Joel Borofsky.