What Are Millennials Really Saying About Marriage? (CaPC) 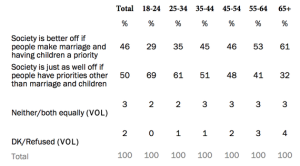 Another week, another story on millennials comes out. This time we have one about millennial attitudes towards marriage. According to a new Pew study, about 70% of my peers think that “Society is just as well off if people have priorities other than marriage and children.” as opposed to about 30 % who think that “Society is better off if people make marriage and having children a priority.”

But as Emma Green over at the Atlantic points out, “Looking at this chart is a little like taking a Rorschach inkblot test on the topic of ‘American values: You could see a lot of different things, if you wanted.”

For instance, this could easily be read as a blaring alarm sign-posting the grim future of marriage in America. Still, given that 75% of millenials in a 2013 Gallup poll that they’d like to get married in the future, it could be something much more benign like a “not quite yet”, which would make sense given the way average marriage ages are creeping higher each year.

I say a lot more about this over at Christ and Pop Culture.