Can a God of Love Have Wrath? 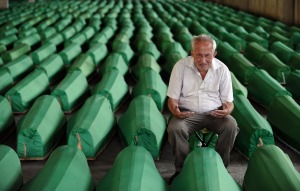 One of the most common tropes in popular theology today is that a God of Love couldn’t be a God of Wrath. The two are completely and utterly opposed. The God of Jesus Christ, overflowing with love for the world in the Gospel, couldn’t possibly stand over against the world in wrath and judgement. Love affirms, while wrath condemns. Love embraces, while wrath rejects. Love is the unfathomable beauty of God, while wrath is everything dark about human hate projected onto God.

Miroslav Volf used to think that the too–until the Bosnian War, that is:

The apostle Paul ascribed to God actions and attitudes that stand in sharp contrast with how such a doting grandparent behaves. He spoke rather freely of God’s “judgment”, “condemnation”, even of God’s “wrath” (see Romans 1:18-3:20). Setting aside the litany of things that the Apostle believed merit God’s condemnation, let’s focus on the fact of it. In particular, let’s examine the appropriateness of God’s wrath, the strongest form of God’s censure….

I used to think that wrath was unworthy of God. Isn’t God love? Shouldn’t divine love be beyond wrath? God is love, and God loves every person and every creature. That’s exactly why God is wrathful against some of them. My last resistance to the idea of God’s wrath was a casualty of the war in former Yugoslavia, the region from which I come. According to some estimates, 200,000 people were killed and over 3,000,000 were displaced. My villages and cities were destroyed, my people shelled day in and day out, some of them brutalized beyond imagination, and I could not imagine God not being angry. Or think of Rwanda in the last decade of the past century, where 800,000 people were hacked to death in one hundred days! How did God react to the carnage? By doting on the perpetrators in a grandparently fashion? By refusing to condemn the bloodbath but instead affirming the perpetrators basic goodness? Wasn’t God fiercely angry with them? Though I used to complain about the indecency of the idea of God’s wrath, I came to think that I would have to rebel against a God who wasn’t wrathful at the sight of the world’s evil. God isn’t wrathful in spite of being love. God is wrathful because God is love.

-Miroslav Volf, Free of Charge: Giving and Forgiving in a Culture Stripped of Grace pp. 138-139

Wrath isn’t the opposite of love, then–indifference is. There are caveats on all of this, of course. It must be remembered wrath is not a primary attribute of God, but rather a relative one provoked by sin–much the way mercy are. What’s more, God is impassible and so his wrath must be conceived of within the parameters of the Creator/creature distinction, with the appropriate safeguards of analogical language in place, protecting us from some crude, explosive Zeus-like wrath. And yet, the bottom line is that it is still something properly, indeed, necessarily affirmed of the God who is the Lover of the world.

Of course, there’s a danger that comes with a theoretical knowledge of God’s wrath–that we keep it at arm’s length and fail to relate it to our own sin:

Once we accept the appropriateness of God’s wrath, condemnation, and judgment, there is no way of keeping it out there, reserved for others. We have to bring it home as well. I originally resisted the notion of a wrathful God because I dreaded being that wrath’s target; I still do. I knew I couldn’t just direct God’s wrath against others, as if it were a weapon I could aim at targets I particularly detested. It’s God’s wrath, not mine, the wrath of the one and impartial God, lover of all humanity. If I want it to fall on evildoers, I must let it fall on myself – when I deserve it.

Also, once we affirm that God’s condemnation of wrongdoing is appropriate, we cannot reserve God’s condemnation for heinous crimes. Where would the line be drawn? On what grounds could it be drawn? Everything that deserves to be condemned should be condemned in proportion to its weight as an offense – from a single slight to a murder, from indolence to idolatry, from lust to rape. To condemn heinous offenses but not light ones would be manifestly unfair. An offense is an offense and deserves condemnation…

And yet, thankfully that is not the whole of the story. God’s love is revealed not only in condemnation of sin, but chiefly in the salvation of sinners from that judgment in the death of his Son:

For while we were still weak, at the right time Christ died for the ungodly. For one will scarcely die for a righteous person—though perhaps for a good person one would dare even to die—but God shows his love for us in that while we were still sinners, Christ died for us.Since, therefore, we have now been justified by his blood, much more shall we be saved by him from the wrath of God. For if while we were enemies we were reconciled to God by the death of his Son, much more, now that we are reconciled, shall we be saved by his life. More than that, we also rejoice in God through our Lord Jesus Christ, through whom we have now received reconciliation. (Romans 5:6-11)