What Has Chicago to Do With Nicaea? Or, “Inerrancy Isn’t In the Bible” 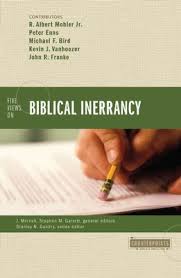 One of the frequent complaints against the doctrine of inerrancy is that, not only is a theological novelty taught nowhere until the 19th century, more than that, “it’s not in the Bible.” Nowhere is there a verse that says the “Bible is completely true in all that it affirms in history, theology, etc. in the original autographs” and so forth. So how then, if we’re Sola Scriptura Protestants, can we go about insisting on it, or other variations like “infallibility” (which, is actually the more comprehensive term), as a sort of de fide doctrine?

As you may know, I’ve been reading the Counterpoints Five Views on Inerrancy book that just came out. You may also know that I unashamedly love Kevin Vanhoozer’s work in this area–and, actually, any area to which he speaks. There’s no surprise, then, that I found his comments on the issue particularly helpful.

In his main essay, he has a number of sections dealing with the Chicago Statement on Biblical Inerrancy. In one, he deals with the charge that the CSBI unnecessarily elevates the doctrine as well as redeploys a distinction used in his Drama of Doctrine, between a judgment of Scripture and it’s conceptual expression, to clarify how a doctrinal can be biblical without being mentioned explicitly in Scripture:

Article 16  [of CSBI] states “that the doctrine of inerrancy has been integral to the Church’s faith throughout its history.” It also denies that inerrancy is “a reactionary position postulated in response to negative higher criticism.” To refute the claim that the doctrine of inerrancy was “invented” by nineteenth-century Princeton is also to rebut the objection that inerrancy, along with the Chicago statement, is a provincial and parochial concern. Can it be done? A full-orbed demonstration of inerrancy’s historical pedigree is beyond the scope of the present essay. Others have been there, done that. I propose instead to compare and contrast the Chicago statement to the creedal statement on the Trinity of the Council of Nicaea. To be sure, the framers of the Chicago statement explicitly say in the preface that they do not propose to give the statement “creedal weight,” but this is not the salient feature of my comparison. I propose to focus instead on a certain parallel between inerrancy and homoousios.

Chicago is not Nicaea: the gospel itself is not directly at stake in inerrancy, nor is it clear whether there was in Chicago a counterpart to Athanasius. I am nevertheless struck by four similarities: (1) the notions of homoousios and inerrancy both arose at a time when the truths they express— in the one case, the full deity of the Son, in the other, the divine truth of the Scriptures— were being challenged; (2) both homoousios and inerrancy are technical terms that have proven to be stumbling blocks to many; (3) neither term is biblical, in the sense of occurring in Scripture; yet (4) both terms reflect underlying biblical convictions or judgments.

My thesis, in brief, is this: while the term inerrant or the concept of inerrancy may be new, the underlying judgment is not. I owe the concept/ judgment distinction to David Yeago, who in a seminal article developed it in connection to Nicaea. Yeago thinks that Paul’s language in Philippians 2: 6, about the Son’s isos theos (“ equality with God”), is saying the same thing as Nicaea’s very different concept homoousios (“ of the same substance”). It is essential “to distinguish between judgments and the conceptual terms in which those judgments are rendered” so that “the same judgment can be rendered in a variety of conceptual terms.”  Similarly, I submit that inerrancy is saying (nearly) the same thing as John’s language in Revelation 21: 5 about the Word of God being pistoi kai alethinoi (“ trustworthy and true”).

The doctrine of inerrancy expresses a nonidentical equivalence to what Scripture teaches about itself. The problem with concepts, however, is that they gradually acquire a medley of associations, each of which affects the core meaning. Although it expresses a biblical judgment, the concept of inerrancy also shows signs of its cultural and historical locatedness. The challenge, then, is to affirm the underlying judgment together with the concept of inerrancy, provided that we can free the latter from unhelpful cultural accretions in order to free it for ministering the whole counsel of God.

In other words, inerrancy expresses a Biblical truth in different terms, in a similar way that the word  homoousios, or even ‘trinity’ does.

Of course, Vanhoozer goes on to actually make the case from Scripture that his rendition of inerrancy, an “Augustinian, Well-Versed Inerrancy”, actually is consistent with what we find there. Still, the concept/judgment distinction helps us see that the issue of whether or not a doctrine is “biblical” isn’t a simple matter of looking it up in a concordance, or finding an adequate proof-text.

(Also, for what it’s worth, Vanhoozer points out that not even Chicago gives inerrancy creedal weight the way some proponents would. It’s not de fide for everybody.)