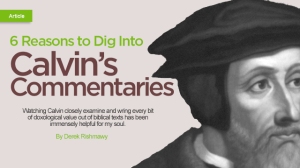 Reading John Calvin’s Institutes after seminary, in the midst of some trials, was easily one of the most theologically formative seasons in my life. Finally encountering the titan’s thought face to face (so to speak) after years of only encountering the stray quote, paean of praise, or jeremiad of condemnation was eye-opening as well as spiritually comforting as he pointed me, page after page, to the goodwill of my fatherly God in Christ. At a less personal level, the four books of the Institutes impressed me in terms of their economy, depth, clarity, scope, scriptural insight, and continual pastoral relevance. I’m probably preaching to the choir here.

But Calvin fans, old and new, don’t always appreciate that the Institutes form a relatively small portion of his corpus. A brilliant systematician and teacher, he was first and foremost a biblical commentator who produced nearly verse-by-verse commentaries on the majority of the books of the Bible.

Recently, I’ve set myself to the task of slowly reading through some of Calvin’s commentaries as part of my devotional time, commenting on them week by week. After a few months, I’ve become convinced it would be a tragedy if these texts were neglected, especially by younger newcomers to the Reformed tradition like myself. They are a treasure trove for the life and ministry of the pastor as well as the lay believer.
Tim Keller gave us a few reasons to read through the Institutes a few months ago, and I couldn’t have agreed more. I’d like to simply piggy-back off of that and offer six reasons why you ought to dig into Calvin’s commentaries as well.
You can go read those reasons over at The Gospel Coalition.
Soli Deo Gloria