Comfort for Slaves in the NT

Bondservants, obey in everything those who are your earthly masters, not by way of eye-service, as people-pleasers, but with sincerity of heart, fearing the Lord. Whatever you do, work heartily, as for the Lord and not for men, knowing that from the Lord you will receive the inheritance as your reward. You are serving the Lord Christ. For the wrongdoer will be paid back for the wrong he has done, and there is no partiality. Masters, treat your bondservants justly and fairly, knowing that you also have a Master in heaven. –Colossians 3:22-4:1 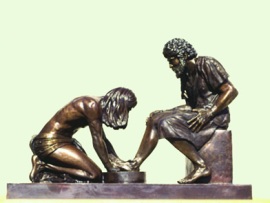 Our experiences with the Civil War, the slave trade, and the Civil Rights movement made us particularly sensitive to the way certain texts have been used by those in power to oppress others. Certain verses in the NT in especially, like Paul’s household codes have been pointed to as encouraging slavery and subjugation. In some cases, they have been seen as evidence of the diversity of theologies in the NT on this issue. J.D. Crossan, for instance, sees them as evidence of a drift in the early church from a more liberated Paul (the undisputed letters), to a conservatising Pauline theologian (Ephesians, Colossians), and finally to a traditionalist disciple (the pastorals.)

Now, while I think these issues have been dealt with and adequately explained by modern NT scholars, it’s encouraging to note that long before the disturbing history of the colonial slave trade, Christians had been wrestling with what to do with these texts. For instance, commenting on this text in Colossians, Calvin doesn’t find a program for oppression, but rather a deep comfort for those who find themselves ‘under subjection’:

By the former statement he means, that service is done to men in such a way that Christ at the same time holds supremacy of dominion, and is the supreme master. Here, truly, is choice consolation for all that are under subjection, inasmuch as they are informed that, while they willingly serve their masters, their services are acceptable to Christ, as though they had been rendered to him. From this, also, Paul gathers, that they will receive from him a reward, but it is the reward of inheritance, by which he means that the very thing that is bestowed in reward of works is freely given to us by God, for inheritance comes from adoption.

Calvin sees at least three sources of comfort here: First, when the slave/bondservant renders his service willingly, he transform it from an instance of subjugation, to another opportunity to freely do honor to his Lord. Instead of work stolen from him by a powerful master, the servant of Christ transvalues it in faith and renders the work an act of spiritual freedom despite whatever political situation of oppression he finds himself in. This is a spiritually subversive counsel.

Second, this is a real source of blessing because the God who has adopted us, sees our faithfulness in this difficult situation and will surely reward us for it. Trial though it may be, God the Father of our Lord Jesus Christ, who made himself a slave for us, will see that the good works of his oppressed are crowned with glory.

Third, the justice of God is testified to here. In the world there may be no justice, but God does not judge things by outward appearance, but rather will repay masters according to the way they treat their workers. No, God has not forgotten his children in trying situations, but jealously will act in justice on their behalf. All wrongs will be righted and so the Christian can wait on the Lord, trusting him to take care of those situations which are beyond our control.

No, far from being a mere conservatising reinforcement of the status quo, we have here a pastorally appropriate word of comfort to real people dealing with a situation they likely had little control over. There is deep assurance here that the God they have found in Jesus Christ cares for the lowliest slave and that his work of judgment and salvation is not only on behalf of the masters of the world, but those whom the world has despised. For that reason, though their work is bitter, they can render it to the Lord with full assurance that it will not be in vain. While over the long haul the Gospel would prove to be corrosive of unjust systems of slavery and oppression, we see the promise of a God who sustains even in the midst of them.

2 thoughts on “Comfort for Slaves in the NT”