That Time C.S. Lewis Got ‘Total Depravity’ Wrong (Like Everybody Else) 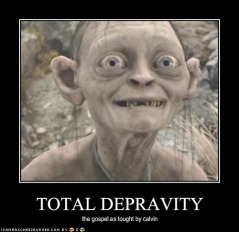 Yes, Gollum is a Tolkien character, not Lewis. I don’t care.

Cliché Evangelical confession: I love C.S. Lewis. Probably too much. His influence on my life and intellectual development as a disciple is hard to gauge. For a while there in seminary, next to the Bible, you were apt to hear me quoting “St. Clive” (as one of my professors dubbed him) more than any other thinker. This is why it pains me to admit that he was slightly misleading about something in his writings, namely Calvinism.

Actually, let’s make that more specific. He got one letter wrong of the Anglo-American acronym that has come to represent ‘Calvinism’ in the minds of most people who have heard the term: the ‘T’ in T.U.L.I.P. , standing for ‘total depravity.’

In his work The Problem of Pain, Lewis discusses the nature of our moral knowledge, and the distance between our judgments and God’s. After making the case that the term ‘good’, when applied to God, is apt to mean something a bit different than we usually think of, he doubles back to say that it can’t be completely different:

On the other hand, if God’s moral judgement differs from ours so that our “black” may be His “white”, we can mean nothing by calling Him good; for to say “God is good,” while asserting that His goodness is wholly other than ours, is really only to say “God is we know not what”. And an utterly unknown quality in God cannot give us moral grounds for loving or obeying Him. If He is not (in our sense) “good” we shall obey, if at all, only through fear – and should be equally ready to obey an omnipotent Fiend. The doctrine of Total Depravity – when the consequence is drawn that, since we are totally depraved, our idea of good is worth simply nothing – may thus turn Christianity into a form of devil-worship. –The Problem of Pain, pg. 29

While Lewis is making a very a good point about our analogical knowledge of good and evil, he happens to do so by trading on a widely-popular caricature of the doctrine of total depravity.

Most people are introduced to the teaching by hearing something along the lines of, “That John Calvin, he was such a pessimist. Did you know that he taught that we were totally depraved? That all of us are about as awful as it gets, none of us knows right from wrong, and we’re born simply and utterly wicked? No wonder he was a downer.” Or something like that.

The problem is that is neither what total depravity, properly understood, nor John Calvin teach with respect to human nature. (Although, I do grant that Calvin probably was kind of prickly.) Actually, as a matter of history, Calvin nowhere mentioned the acronym ‘TULIP’. Being dead at this point, he didn’t even know about the Canons of Dordt, the 17th century document that the 19th century acronym is trying to summarize.

So what do Calvin and total depravity teach? Richard Muller sheds some light for us:

Calvin’s references to the utter deformity or depravity of the human will and human abilities were directed against forms of synergism or Semi-Pelagianism and refer to the pervasiveness of sin — reducing this language to the slogan “total depravity” endangers the argument…“Total depravity,” at least as understood in colloquial English, is so utterly grizzly a concept as to apply only to the theology of the Lutheran, Matthias Flacius Illyricus who an almost dualistic understanding of human nature before and after the fall, arguing the utter replacement of the imago Dei with the imago Satanae and indicating that the very substance of fallen humanity was sin. Neither Calvin not later Reformed thinkers went in this direction and, to the credit of the Lutherans, they repudiated this kind of language in the Formula of Concord. What is actually at issue, hidden under the term “total depravity” is not the utter absence of any sort of goodness but the inability to save one’s self from sin.

-Richard Muller, Was Calvin a Calvinist? Or, Did Calvin (or Anyone Else in the Early Modern Era) Plant the “TULIP”?, pp. 8-9 (HT: Alastair Roberts)

As you can see, Muller isn’t much of a fan of TULIP, mostly because of the easy tendency towards caricature (I mean, even Lewis didn’t explain it properly.) Still, his explication of Calvin’s thought on the subject also serves for the better articulations of total depravity taken up by current Reformed theologians.

To be clear, the doctrine does not teach that all humanity is as “depraved” as possible. “Total” refers to the scope, not depth, of the problem of sin. It affirms that there is not a single area or part of our nature that has not been subject to sin’s corrupting influence; though created good, not our mind, will, reason, bodily instincts, or anything else that could be singled out, remains untouched by the Fall. As such, there is no leverage or foothold in human nature whereby it might reach up to God, or present any merit, without having first been enlivened by the Holy Spirit’s power. As Michael Horton says, “there is no Archimedean point within us that is left unfallen, from which we might begin to bargain or restore our condition” (The Christian Faith, pg. 433). Nor is there any impulse or instinct that is not subject to correction from God’s Word.

This is true of the vilest criminal, or the sweetest, kindest neighbor that most of us would describe as a “good guy.” None has a chance of saving themselves by drawing on their own inner, moral resources. But, as we said, that doesn’t mean that they’re as bad as they can be. We are “not incapable of any justice or good before fellow humans” (Horton, ibid, pg. 433). No, in fact, we do have an active, if defective, conscience that points to right and wrong, as well as accuses and defends us before God (Rom. 2). Calvin himself quoted pagan philosophers approvingly, at times, when they concurred with Scripture’s moral judgment. We are able to do relatively good, yet not saving, acts through common grace and common virtue. Good of this sort is nothing to be sneered at and is a testimony to the permanence of the Image of God as well as the gracious, restraining work of the Holy Spirit.

Where does this little crash course in one, highly-misunderstood, aspect of Reformed anthropology, leave us? Well, for one thing, you can say you know something that C.S. Lewis didn’t about the history of Christian doctrine. But seriously, it serves as an important lesson against making any theologian, pastor, or author, even someone as wonderful as Lewis too authoritative in your intellectual life. As great as someone might be, if you’ve never disagreed with them, you’re probably not reading them critically enough.

Most of all though, it serves as a reminder of God’s redeeming, regenerative grace. For every inch of you that’s been ‘depraved’ or, rather, bent through sin, is being restored and resurrected whole and new in Christ.

43 thoughts on “That Time C.S. Lewis Got ‘Total Depravity’ Wrong (Like Everybody Else)”