Perfection And Incarnation (Or, Some Thoughts on Zack Hunt’s Imperfect Bible) 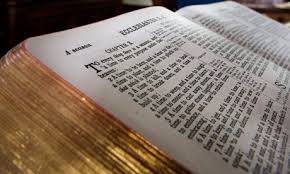 If you read this blog often, you know I don’t typically pick fights with specific bloggers, or even positions–I generally just like putting forward positive content. I certainly don’t like challenging smart guys like Zack Hunt. I mean dude’s got some theological chops, a big blog, he’s going to Yale, and is a good enough writer to score a book deal; I have a kind of ugly-but-functional blog my mom reads and a poorly-followed Twitter account. Still he wrote a piece over at Red Letter Christians on the inerrancy or rather, non-inerrancy, of the Bible that I found interesting and worth examining. Also, I was kind of bored.

His basic argument, as far as I followed it, was that the reason he believed the Bible isn’t perfect is because the Bible itself told him so. Also, nobody believed in its ‘inerrancy’ until like, 150 years ago. Or something like that.

If I had to boil down the argument into one quote, it’d probably be this chunk right here:

Do you remember the other big moment when we read about something being “God-breathed” in scripture? Sure you do. We find it in the very beginning, in Genesis chapter 2 verse 7 when God took the dust of the ground and breathed life into it to create humanity.

In that moment God breathed something into existence…..which wasn’t perfect. It couldn’t be. It wasn’t God.

Because scripture is also “God-breathed” it means it too isn’t God. Nor does it even come directly from God, but instead it passes through an intermediary. In the beginning, the intermediary between us and God was dirt. God breathed into it and the result was that we were created.

In the case of the Bible, God breathed His truth into the hearts and minds of people and the result was that the Bible was created. But like that ancient dirt that gave birth to us, the people who wrote the Bible, God’s intermediaries, weren’t perfect. Which is why Paul says “For now we see in a mirror dimly, but then face to face; now I know in part, but then I will know fully just as I also have been fully known.”

Hunt then goes on to affirm that we can basically trust the Bible because, even though Noah probably didn’t get all those animals on the boat, we can still believe what the story is trying to teach: God will take care of us in the storms. We don’t need something to be inerrant or “perfect” for it to convey truth, it just needs to be honest enough. A basically truthful message doesn’t need to keep all the details straight for it to be correct and trustworthy. That’s what faith is about–kinda like with your parents, you trust it even when you have some doubts about it. Holding out for some theoretical inerrancy that doesn’t fit the text itself isn’t faith, but a fearful struggle to control the divine.

Now, on the issue of faith and I’d simply note that Karl Barth had some different ideas than Paul Tillich which are worth considering. The historical point, I will leave to others to debate without comment as well. I think there is definitely something to the idea that testimony can be essentially reliable while a couple of minor details are crossed. I’m not saying that’s what’s happening in the Bible, but I think it’s important to affirm valid points when you see them.

On his argument about perfection I do have a few thoughts, though.

To be clear at the outset, I’m not going to argue in detail for some particular view of inerrancy or infallibility simply because, to be honest, it’s a short blog so there isn’t time. I do think it’s helpful to point out that there are varying views as to what constitutes inerrancy such as the Chicago Statement (which has multiple interpretations), Old Princetonian articulations, and other more rigid views. It’d probably be helpful to define it, but since Hunt doesn’t and it won’t affect my argument, I’ll leave it be. For the curious, whatever Kevin Vanhoozer says, I’m right around there.

What I do want is to briefly, and incompletely, examine a few of the basic components or assumptions in the argument forwarded by Hunt, in no particular order.

It’s Not God, But it is His Work

As Hunt astutely points out, the Bible is not God, but is “God-breathed” (theopneustos). So, it’s wrong to attribute to the Bible all of God’s perfections. Only God is immortal, immutable, eternal, all-powerful, and so forth. The Bible is not these things and to say that it is, is a sort of idolatry that ignores the fact that it is clearly a human book that “was written by people”; humans who left their individual marks on the texts they produced.

Now, to begin, I’d just like to note that the proponents of inerrancy that I know of would easily confess this. For instance, Old Princeton theologian B.B. Warfield, truly old-school on inerrancy, makes a big deal about the way Paul’s letters bear his distinctive stamp–they have the unique marks of his very human personality, thought, and history. And yet, Warfield still affirms that they are God’s works and are to be identified with him. In other words, he ascribes to a view of dual authorship whereby, without violating creaturely freedom and contingency, God somehow brings it about that Paul writes what he wanted him to write; even though they’re human words, it doesn’t prevent them from somehow being divine ones as well. That’s why Jesus can say “it is written”, and Paul can quote the OT and say “Scripture says”, as if it were equivalent to “God says.”

When the Christian asserts his faith in the divine origin of his Bible, he does not mean to  deny that it was composed and written by men or that it was given by men to the world. He believes that the marks of its human origin are ineradicably stamped on every page of the whole volume. He means to state only that it is not merely human in its origin…

The Scriptures, in other words, are conceived by the writers of the New Testament as through and through God’s book, in every part expressive of His mind, given through men after a fashion which does no violence to their nature as men, and constitutes the book also men’s book as well as God’s, in every part expressive of the mind of its human authors.

In which case, it’s not quite as simple as distinguishing Creator from creation then, because the two are related. The integrity and characteristics of the one speaks to the ability of the other.

“God-Breathed Humans” and Types of Perfection

Hunt also points out that the other thing we read in Scripture was God-breathed were humans–and they clearly weren’t perfect, just good. Cutting off a quick objection, he says we can’t simply point to the Fall either and say, “Well, we were and then we became sinful.” The Bible only says that we were very good, and yet clearly we were capable of temptation. I mean, we’re not God, so how could we be perfect? So neither is the Bible.

Now once again, yes, humans are not perfect–certainly not as God is perfect. And yet that isn’t the end of it. You see, we are meant to be perfected in redemption, just as we were meant to be perfected in the Garden. Just as there is an eschatological dimension to our salvation now, there was one then; God had the goal of bringing his “good” creation to a point of perfection. One thing we always forget about the glory of salvation is that one day we will be made like Christ, the perfectly glorified human one, without becoming the Creator. We will be a perfectly redeemed creation. What I’m trying to say is that simply pointing out that the Bible isn’t God, doesn’t mean it can’t be perfect. It means it can’t be perfect in the way God is, but it doesn’t rule out a derivative, analogical sort of perfection–perfect for the sort of thing that it is. Eventually we will be perfect for the sorts of non-divine things we are. It seems at least possible then, for something created, like the Bible, to be perfect in it’s own particular way.

I’ll be briefer here because this point follows after the others, but Hunt makes something of the Bible coming by way of intermediaries. Just as God used dirt to make humans and so we came out a bit dirty (not in that sense), God used dirty humans to get his message across and they wrote a “dirty”  Bible. It’s good enough, but since it is the work of a human intermediary we shouldn’t expect perfection.

Now, to my mind, it seems relevant that we believe in a Gospel that has the Incarnation right at its center. The Divine Son, takes up humanity in order to perfectly say and do what God says and does in a human way. To put it another way, the man Jesus Christ’s saying and doing is simply God saying and doing as a human. Humanity made in the Image of God, set free from sin, is apparently a fit vehicle for the perfect-but-veiled revelation of God himself in Jesus. I’ll be the first to throw up a big caution before collapsing the Creator/creature distinction, but working from the Incarnation, as unique and unrepeatable as it is, we seem to be presented with the truth that a thing’s non-divinity does not disqualify it as medium of perfect, if limited, revelation.

Now, to be sure, “perfect” does not mean “complete” or “full without remainder.” In that sense, yes, we see “through a glass darkly.” This side of the eschaton we do not know all things, nor do we know them as God does; we should not expect to. We can trust that God has perfectly told us those things we need to know now in order to know God fully then. Incidentally, to use that verse as an argument for the errancy of Scripture is as persuasive exegetically as cessationists’ appeal to it as evidence that the gifts ended when we got the Bible–which is to say, not very much at all because those verses aren’t talking about the Bible.

Again, this isn’t a full response, nor was it intended to be. I’m sure I haven’t convinced anybody as to the inerrancy, non-inerrancy, or infalliblity of the Bible. There are probably 20 different issues I could have brought up that play a role in our understanding of Scripture. I simply wanted to make a few clarifying points with respect to Divine authorship, redemption, and Incarnation that might shed some light on the possibility of the Bible’s “perfection.”

33 thoughts on “Perfection And Incarnation (Or, Some Thoughts on Zack Hunt’s Imperfect Bible)”