Talk is Blessed, Talk is Cheap (Or, Holiness is More than a Change in Vocabulary)

I continue to find gem after gem in my travels through Bunyan’s Pilgrim’s Progress. Both the instructive and lively narrative portrayals of the Christian life (Christian’s rousing battle with Apollyon), and the conversations between the various virtues (Charity, Faithful), vices (Sloth, Pliable), and typical attitudes (Shame, Discontent) are rich in spiritual depth and comfort.

One such exchange comes during a part of the journey when Christian and Faithful run into one claiming to be on the road to the celestial city by the name of Talkative. Faithful is quite glad to have him join them and talk of spiritual things on the journey, which it seems that Talkative is quite eager to do: 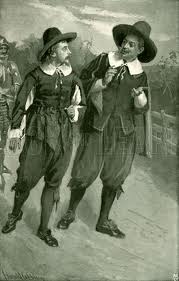 FAITHFUL: All this is true; and glad am I to hear these things from you.

TALKATIVE: Alas! the want of this is the cause that so few understand the need of faith, and the necessity of a work of grace in their soul, in order to eternal life; but ignorantly live in the works of the law, by which a man can by no means obtain the kingdom of heaven.

Apparently Talkative knows his stuff. He clearly knows the benefits of wise speech about God. Many of us could profit from an eagerness to discuss and speak about God, theology, the Bible, and our own spiritual lives more often than we do. By it we are “may learn what are the great promises and consolations of the Gospel, to his own comfort. Farther, by this a man may learn to refute false opinions, to vindicate the truth, and also to instruct the ignorant.”

Can we imagine what our general outlook would be, the witness of our lives, or the state of our faith would be if we spent more time discussing God’s goodness and not the mere trivialities to which we devote most of our conversations? How much holier would we be if we were constantly calling to mind God’s faithfulness in the face of daily temptations? Wouldn’t our constant doubts and anxieties begin to shrink in front of our eyes, if we were constantly reminding each other of the magnitude of God’s power and the unshakeable character of his promises?

The benefits to frequent godly conversation are many and deep indeed. When we read on though, we find out that Bunyan is teaching us that along with the benefits of spending our time discussing God and the Gospel, there are dangers as well.

CHRISTIAN: That is, to them that have not a thorough acquaintance with him, for he is best abroad; near home he is ugly enough. Your saying that he is a pretty man, brings to my mind what I have observed in the work of a painter, whose pictures show best at a distance; but very near, more unpleasing.

FAITHFUL: But I am ready to think you do but jest, because you smiled.

CHRISTIAN: God forbid that I should jest (though I smiled) in this matter, or that I should accuse any falsely. I will give you a further discovery of him. This man is for any company, and for any talk; as he talketh now with you, so will he talk when he is on the ale-bench; and the more drink he hath in his crown, the more of these things he hath in his mouth. Religion hath no place in his heart, or house, or conversation; all he hath lieth in his tongue, and his religion is to make a noise therewith.

FAITHFUL: Say you so? Then am I in this man greatly deceived.

CHRISTIAN: Deceived! you may be sure of it. Remember the proverb, “They say, and do not;” but the kingdom of God is not in word, but in power. Matt. 23:3; 1 Cor. 4:20. He talketh of prayer, of repentance, of faith, and of the new birth; but he knows but only to talk of them. I have been in his family, and have observed him both at home and abroad; and I know what I say of him is the truth. His house is as empty of religion as the white of an egg is of savor. There is there neither prayer, nor sign of repentance for sin; yea, the brute, in his kind, serves God far better than he. He is the very stain, reproach, and shame of religion to all that know him, Rom. 2:24,25; it can hardly have a good word in all that end of the town where he dwells, through him. Thus say the common people that know him, “A saint abroad, and a devil at home.” His poor family finds it so; he is such a churl, such a railer at, and so unreasonable with his servants, that they neither know how to do for or speak to him. Men that have any dealings with him say, It is better to deal with a Turk than with him, for fairer dealings they shall have at their hands. This Talkative (if it be possible) will go beyond them, defraud, beguile, and overreach them. Besides, he brings up his sons to follow his steps; and if he finds in any of them a foolish timorousness, (for so he calls the first appearance of a tender conscience,) he calls them fools and blockheads, and by no means will employ them is much, or speak to their commendation before others. For my part, I am of opinion that he has, by his wicked life, caused many to stumble and fall; and will be, if God prevents not, the ruin of many more.

FAITHFUL: Well, my brother, I am bound to believe you, not only because you say you know him, but also because, like a Christian, you make your reports of men. For I cannot think that you speak these things of ill-will, but because it is even so as you say.

CHRISTIAN: Had I known him no more than you, I might, perhaps, have thought of him as at the first you did; yea, had I received this report at their hands only that are enemies to religion, I should have thought it had been a slander-a lot that often falls from bad men’s mouths upon good men’s names and professions. But all these things, yea, and a great many more as bad, of my own knowledge, I can prove him guilty of. Besides, good men are ashamed of him; they can neither call him brother nor friend; the very naming of him among them makes them blush, if they know him.

FAITHFUL: Well, I see that saying and doing are two things, and hereafter I shall better observe this distinction.

CHRISTIAN: They are two things indeed, and are as diverse as are the soul and the body; for, as the body without the soul is but a dead carcass, so saying, if it be alone, is but a dead carcass also. The soul of religion is the practical part. “Pure religion and undefiled before God and the Father is this, to visit the fatherless and widows in their affliction, and to keep himself unspotted from the world.” James 1:27; see also verses 22-26. This, Talkative is not aware of; he thinks that hearing and saying will make a good Christian; and thus he deceiveth his own soul. Hearing is but as the sowing of the seed; talking is not sufficient to prove that fruit is indeed in the heart and life. And let us assure ourselves, that at the day of doom men shall be judged according to their fruits. Matt. 13:23. It will not be said then, Did you believe? but, Were you doers, or talkers only? and accordingly shall they be judged. The end of the world is compared to our harvest, Matt. 13:30 and you know men at harvest regard nothing but fruit. Not that any thing can be accepted that is not of faith; but I speak this to show you how insignificant the profession of Talkative will be at that day.

This is the danger Bunyan warns us of: apparently Talkative is just that–all talk and no action. In this passage Christian instructs Faithful in the difference between saying and doing. It’s an easy one for us to forget.  It’s easy to feel like having the right answers makes us righteous. It’s easy to feel like being able to distinguish properly between justification and sanctification means that we’ve been justified and sanctified. It’s easy to think that condemning sin with our mouths means we’ve cut it out of our lives. It’s easy to think that because we can discourse about the Trinity, we’re actually engaged in the life of the Triune God.

Bunyan reminds us that while it’s important for pilgrims on the way to discuss the beautiful things of God, we must not be satisfied with mere discussion. The Christian life is one of active participation. We must practice Christianity as well as speak of it. Faith that truly is worth the name, is one that results in a changed life, not merely a different vocabulary.

Talking about God is a great thing as long as it encourages us to talk to God; to move from conversation about the Christian life, to participation in a real Christian life.