Keller, Evangelical Polarization, and the Folly of Measuring Coffins

So, the Evangelical twitter world just had another blowout this week. While these sorts of things happen every month or so, providing a bit of cathartic release from the build-up of rage, veiled contempt, and genuine frustration, this last one over the World Vision hiring policy kerfuffle seemed particularly nasty. Hysterical accusations were levelled, tweets were tweeted, unfriendly farewells were traded across the aisle, and a few sane arguments were sprinkled in for good measure.

In the middle of it all, on an unrelated note, Tim Keller tweeted out this:

Both secularism and devout faith are growing. What’s going away is the mushy middle of religiosity.

It echoed his opening analysis in his best-seller The Reason for God, which seems worth quoting at length:

There is a great gulf today between what is popularly known as liberalism and conservatism. Each side demands that you not only disagree with but disdain the other as (at best) crazy or (at worst) evil. This is particularly true when religion is the point at issue. Progressives cry out that fundamentalism is growing rapidly and nonbelief is stigmatized. They point out that politics has turned toward the right, supported by mega-churches and mobilized orthodox believers. Conservatives endlessly denounce what they see as an increasingly skeptical and relativistic society. Major universities, media companies, and elite institutions are heavily secular, they say, and they control the culture.

Which is it? Is skepticism or faith on the ascendancy in the world today? The answer is Yes. The enemies are both right.

Skepticism, fear, and anger toward traditional religion are growing in power and influence. But at the same time, robust, orthodox belief in the traditional faiths is growing as well. The non-churchgoing population in the United States and Europe is steadily increasing. The number of Americans answering “no religious preference” to poll questions has skyrocketed, having doubled or even tripled in the last decade. A century ago most U.S. universities shifted from a formally Christian foundation to an overtly secular one. As a result, those with traditional religious beliefs have little foothold in any of the institutions of cultural power. But even as more and more people identify themselves as having “no religious preference,” certain churches with supposedly obsolete beliefs in an infallible Bible and miracles are growing in the United States and exploding in Africa, Latin America, and Asia. Even in much of Europe, there is some growth in church attendance. And despite the secularism of most universities and colleges, religious faith is growing in some corners of academia. It is estimated that 10 to 25 percent of all the teachers and professors of philosophy in the country are orthodox Christians, up from less than 1 percent just thirty years ago…

In short, the world is polarizing over religion. It is getting both more religious and less religious at the same time. There was once a confident belief that secular European countries were the harbingers for the rest of the world. Religion, it was thought, would thin out from its more robust, supernaturalist forms or die out altogether. But the theory that technological advancement brings inevitable secularization is now being scrapped or radically rethought. Even Europe may not face a secular future, with Christianity growing modestly and Islam growing exponentially.

As I thought about it, I couldn’t help observing that it seems like we’re witnessing something of the same thing at work in Evangelicalism, with some slight variations. On the one hand, you see more conservative tribes, especially of the Reformed sort, talking about the growth of the movement, praising the blitz of theologically-conservative books, and conferences. On the other hand, its not hard to find progressives and post-Evangelicals speak about the tide going their way, the upsurge of popular support amongst the younger generations, a similar spate of books, and general grass-roots rejection of conservative ham-handedness.

So who’s right? From where I’m standing, they both are. What seems to be getting lost is the Evangelical middle. Why? Well, probably a lot of reasons, but in view of the last week’s “dialogue”, in the technologically-amplified Argument Culture, centrist voices tend to get marginalized and the loudest mouths dominate the air/screen-time.

Now, though I line up theologically more to the Reformed right, as I you might be able to tell, I don’t think this is necessarily a good thing. While the ‘Evangelical middle’ isn’t always some theological safe zone, a spectrum is usually more helpful in terms of thoughtful conversation and deliberation that a highly-politicized, whole-package, two-party system you have to buy into in order to have a voice. In a polarized culture, every event, every issue becomes a battle-line to take your place on. While I don’t mind laying my cards on the table most of the time, I do like having a full deck to choose from.

As for long-term prospects, I’d say that in light the overall secularization of culture and the broader influence of liberal theology in the culture, despite the institutional decline of the mainline that Christian Smith and others have talked about, progressives and Post-Evangelicals do seem to have the cultural edge.

Of course, it’s an open issue whether they can pull their disparate streams into the corresponding institutions needed to sustain a full-fledged movement. Its anti-hierarchical, and, at times, anti-doctrinal stance makes that more difficult than more conservative or confessional groups. What’s more, I have admit, I do wonder if the superficial unity we see on flash-point cultural issues, or in vocal opposition to mutually-disdained conservative organizations, covers a deeper, disunity on fundamental presuppositions within it. Who knows? I’m just spit-balling here.

Following off of this, if Church history teaches us anything, it’s that measuring coffins is an ugly business and an unpredictable one. All you have to do is study the ebb and flow of the Trinitarian controversies in the 4th century to know what I mean. A lot happened between the First and the Second councils of Nicaea.

This is why I’ll admit that I kind of cringe when some Reformed types talk in self-assured tones about the “death” of the emergent movement. The name died, sure, and Brian McClaren books maybe don’t have the sex-factor they used to, but evaluations like that still underestimate the movement’s long-term impact, and metamorphosis into the Post-Evangelicalisms of various sorts we’re seeing.

On the flipside, when progressives talk about millennial exodus from Evangelicalism and hopefully predict the imminent death of its conservative expressions, they ignore how much of that movement is not to progressive forms, but to conservative communions like Eastern Orthodoxy, Roman Catholicism, and other confessional traditions. What’s more, these prognostications seem a bit parochial in their focus on the Western, American context at the expense of the growth of robustly conservative Christianity in the Majority world and Asia.

Now, for a final note that may undermine all of my ramblings: we Evangelical/Post-Evangelical Twitteratti (and yes, I do include myself in the mix now), often-times have an over-inflated sense of the importance of our own conversations. For every blog post shared, thousands wouldn’t think to waste their time reading one. Not that it’s right, but more American Evangelicals probably know about Chris Martin and Gwyneth Paltrow breaking up than they do about the World Vision (non-)decision this week. Every once in a while, it’s good to step back and take a breathe on this stuff.

Tim Keller: 4 Doctrines You Need To Know When You’re Suffering 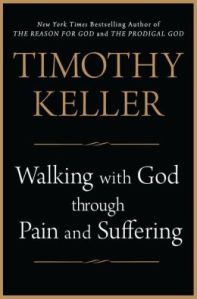 I just began Tim Keller’s monumental new book on the problem of evil Walking with God through Pain and Suffering and it’s, well, it’s monumental. I’ve read a number of books on the subject, especially in my undergrad in philosophy, and I have to say, though I’m only a couple of chapters in, it’s going to be the new classic on the subject. Unlike other works on the subject, he’s not only pastoral, or only philosophical, or only theological, but he approaches the issue of suffering from all of these angles and more. Sociology, literature, theology, philosophy, and, of course, the Scriptures, are brought to bear on the seemingly intractable burden of suffering and evil.

While we can’t logic ourselves out of pain, making meaning of our suffering is inevitable, and the framework through which you view life reveals itself most clearly in our approach to pain. Without doing a full review, I wanted to simply highlight a key little section towards the beginning where he, in short order, lists four key doctrines of the Christian faith that give deep resources for dealing with pain, suffering and evil over and against the secular or deistic view (numbers are mine):

—Walking with God through Pain and Suffering, pp. 58-59

Note clearly: this is no mere theism with general platitudes about everything working itself out, or karma, or what-have-you, but concrete consolation grounded in deep Gospel truth revealed in the cross and resurrection of Jesus Christ. Even the first doctrine of God’s inscrutable wisdom is one grounded in fact that Jesus was “delivered up according to the definite plan and foreknowledge of God” (Acts 2:23), for our salvation.

Clearly we could expand on all of these (and Keller will), but these four thick truths of the Christian faith are the key doctrinal pillars upon which any properly Christian response to suffering will rest. This is how the Christian begins to deal with the problem of pain and suffering. Once more, this is why doctrine matters for real life.