Retrieval–It’s What All The Hip Reformed Catholic Kids Do 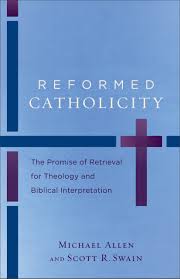 The theological hills are alive with the sound of “retrieval”–the idea that theology can only go forward if it begins by looking backward to the tradition that maintained and fed the faith that came before it. Whether it’s looking back to the Fathers, or Thomas, or the early Reformed tradition, across the denomination divides, theologians are increasingly explicit about their necessary dependence on the theology of their forebears, whether in the Creed, Counsels, or Confessions. In his section arguing for the importance of recovering traditioned thought in The Drama of Doctrine, Kevin Vanhoozer listed a number of reasons (Biblical, traditional, philosophical, inevitable, and spiritual), but among them was the fact that it was “fashionable” (pg. 158), by which he meant supported by contemporary movements in literary theory.

In other words, all the cool kids are doing it.

I was reminded of this point as I opened Michael Allen and Scott Swain’s little volume Reformed Catholicity: The Promise of Retrieval for Theology and Biblical Interpretation. Part of their project is making the case for a Reformed iteration of this movement that appreciates the traditional shape of even Protestant practices like Sola Scriptura, which commonly is interpreted as precluding this sort of activity. In order to set the stage for their own project, though, they begin by compiling and briefly describing a fascinating list of recent movements in theology that have set the stage, or contributed to the revival of retrieval in theology (pp. 4-12). I thought it might be useful to briefly summarize their summary and comment on their summary list.

As I read Allen and Swain’s list, I was fascinated to note how many of the movement and theologians had their effects on my own journey. When I was young in theology, the emergent conversation was in full swing and so the talk of appealing to tradition was definitely in the air. Thankfully reading some Pelikan and Vanhoozer showed me early that it could be done while keeping your Orthodox and Evangelical wits about you. In philosophy, MacIntyre’s work in After Virtue and Whose Justice? Which Rationality? had its effect as well. Oden and Bloesch are sitting on my shelf, duly marked up, as well as some Barth, Boersma, and Jenson. I suppose my early classes in the history of philosophy had their effect as well. It’s hard to take a whole class on Augustine’s thought and believe him irrelevant to any theological conversation. This is also largely the impulse behind my big reading projects.

Beyond this personal reflection, though, a few things are worth noting about this list.

First, retrieval is an ecumenical endeavor. Theologians across the major traditions, both Catholic and Protestant, are well-represented. Although, one important absence ought to be noted and that is the names of any Eastern Orthodox theologians. The burgeoning awareness of Eastern Orthodox theology has definitely spurred on the movement towards engagement with the Fathers on the part of Western theologians.

Second, retrieval is not a monolith. As already noted with the case of Jenson and someone like Oden, two theologians may be committed to the project and yet their engagement may yield wildly diverging judgments on something like the doctrine of God. What’s more, since it is an ecumenical endeavor with a catholic spirit, it will inevitably bear diverse fruits as theologians approach the catholic tradition from within their own ecclesiastic locations.

Third, and connected to the second, retrieval theology need not yield theological sterility. Some of the most creative theological minds of the 20th Century are included in that brief summary. Indeed, when think of some of the work being done in the Theological Interpretation of Scripture, some of the brightest of our own very young century are those looking back to the wisdom of yesteryear through figural and typological readings. Many have ended up breaking the modern, interpretive mold in the process.

Finally, retrieval can be quite practical. Indeed, most of the movements and theologians mentioned are quite heavily involved with the cause of church renewal within their respective communions. Looking to the past is not simply done for the sake of dry antiquarianism, but for the life of the Church in the world today. In other words, it’s not only done to preserve the memory of the victories of church triumphant, but for the battles the church militant is currently embroiled in.

Now the question is, what exactly will Allen and Swain contribute to the discussion? I suppose I’ll just have to keep reading to find out. I’d suggest that many of you consider doing the same. You can purchase the book here.