Was Jesus a Pacifist? Posts on Pacifism and Just War 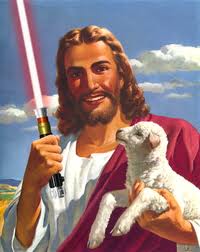 For being the dominant position in the Western theological tradition, finding a good, cleanly argued text for Just War Theory can be pretty difficult. While popular defenses of pacifism abound, now that it’s increasingly in vogue amongst the younger theological set, similarly accessible counterpoints are rarer. Actually, I’d be surprised if most people have encountered Just War reasoning outside of pacifistic refutations of the tradition. That’s why I’ve been pleased to read Andrew Fulford’s multi-post series over at the Calvinist International defending Just War theory entitled “Was Jesus a Pacifist?”

I’d summarize  them myself, but Fulford does it himself in his brief overview of  the project in his 7th post which contains links to the first six:

The argument began with a survey of four aspects of Jesus’ background: natural law, the context of literary conventions, social context, and the Old Testament. These four aspects pointed to the conclusion that Jesus’ teaching was not pacifistic. The second post presented the various kinds of pacifisms, and the reasons offered to support these kinds, to facilitate comparison. That is, once the reasons for non-violence were clear, we could check to see whether the source documents for the Christian religion held those reasons. The third post began by concluding the background for Jesus’ teaching did not consist with pacifism. It continued by surveying the NT documents, written after Jesus’ teaching had first been given. This aimed at discovering if Jesus’ teaching, intervening as it does between OT and NT, produced effects that would suggest he had departed from what his background would lead us to expect. The third post found that all four aspects of his background continued into the age of the New Testament. This made the conclusion that Jesus was not a pacifist even more likely.  The fourth and fifth parts of the series attempted to explain the teachings and actions of Jesus that pacifists claim support their position, and found that none of these teachings or actions do so.  Finally, the sixth post provided some possible explanations as to why the early church misunderstood what those teachings were really about, and turned to embrace pacifism.

After the summary, he concludes the post with a lengthy overview of the relationship between the doctrine of the Two Kingdoms and the Just War tradition.

This is a careful, thoughtful treatment that eschews quick generalizations and snap-readings of passages, engages with scholarly work, but doesn’t get bogged down in endless detail. The articles are not quick skims, but neither are they unapproachable beasts. I’d strongly encourage anybody interested in the question Christians, war, and the state to read these posts carefully and attentively.