Mayors and Prophets: Both Servants of the Lord in Tricky Times

Ahab’s reign in the Kingdom of Israel was one of the most godless in her whole history. And that’s saying something. Queen Jezebel has instituted worship of the Baals and ordered all the prophets of Yahweh slaughtered. The godlessness is so rampant that Yahweh has the prophet Elijah proclaim a drought and a famine in the land of Israel, in response. If Jezebel and Ahab want the word of Yahweh to dry up in the land, they will suffer the consequences.

What does it look like to serve Yahweh faithfully in this context? In the first half of 1 Kings chapter 18, right before Elijah’s confrontation with the prophets of Baal on Mt. Carmel, we’re given a portrait of two quite distinct servants of Yahweh: Obadiah, the household manager in Ahab’s court, and Elijah, the iconoclastic prophet.

In his absurdly insightful theological commentary, Peter Leithart sheds some light on the distinct roles they play in the Yahweh’s retinue:

As “mayor of the palace” Obadiah holds a high position in Israel, with responsibility for Ahab’s palace, estates, and livestock. Both Elijah and Obadiah (whose name means “servant of Yah”) are faithful servants of Yahweh, the God of Israel, but radically differ in their position and mode of service. Elijah confronts Ahab from outside the court, while Obadiah works for the preservation of the prophets–and hence the preservation of the word of Yahweh–from within Ahab’s court, subverting the official policies of the court even while acting as chief steward. Not every faithful believer is called to be an Elijah. Many are called to the tricky work of remaining faithful in a faithless context, to the business of serving Elijah and Yahweh as “master” (18:7) and serving Ahab as “master” (18:8) Obadiah’s position is not merely tricky; it is dangerous. A false shepherd, Ahab tolerates Jezebel “cutting off”…prophets (18:4), but is reluctant to “cut off” any of his cattle…(18:5). Jezebel the Baal worshiper is willing to tolerate golden calves and other forms of idolatrous worship, but she cannot tolerate the intolerance of Yahweh worshipers.

Elijah is obviously the hero of the whole narrative and one of the central figures in both 1 & Kings. Elijah has the word of Yahweh come to him personally. Elijah courageously calls out Ahab, the king of Israel in the name of the true God. Elijah faces off with the prophets on the mountain, calling down fire from Yahweh in the heavens. Elijah is a model of prophetic faithfulness, the willingness to stand outside the compromising systems of empire and power, depending solely on the Yahweh’s protection and preservation to carry out his task.

And yet, there stands Obadiah–the skittish, possibly compromised, bureaucrat. Because, think about it–wouldn’t many of us on the purist end (a rather exaggerated Neo-Anabaptist, possibly), be tempted to consider him compromised? Isn’t he working for a godless king in a regime that seems actively hostile the will of Yahweh? Aren’t followers of Yahweh to remain pure and set apart from evil-doers and the systems of power that they run? To avoid colluding with Empire? Doesn’t running Ahab’s household count?

Well, according to the political theology of 1 & 2 Kings, it’s only because of Obadiah’s willingness to stay within the regime that he was able to successfully resist it and save some of Yahweh’s prophets, ensuring that when Elijah’s showdown happens and the prophets of Baal are overthrown, there’s someone around to preach God’s Word. Obadiah is able to exercise wisdom and rebel from within, only because he stays within.

In times of trial like those facing God’s people in the times of Ahab, the danger is the Elijahs and Obadiahs God has called to serve him might not recognize each other’s distinct calls. Elijah might be tempted to scorn the cowardice and compromise of Obadiah’s wisdom in difficult places. Obadiah, meanwhile, might be tempted to bemoan and begrudge the “trouble” brought on by the rash words and confrontational stance of Elijah, who seems to paint everything in black and white with no shades of grey. And yet that would be a mistake, for God’s wisdom can employ both prophet and bureaucrat to preserve and proclaim his Word, each according to the gifts and privileges that God had given them. In a sense, we need Paul’s theology of the body and the gifts (Romans 12; 1 Corinthians 12). applied outward into the worldly vocations that the citizens of the Kingdom must engage in.

Texts like this are obviously relevant in the face of a culture that is increasingly intolerant of the “intolerance” or exclusivity of Christian values and truth claims. Don’t worry, I’m not breaking out the “p”-word and claiming that Christians will have to face firing squads soon, or something like that. All the same, let’s not be naive in the other direction. If there are Chicken Littles running around proclaiming the imminent descent of the heavens, there are also ostriches with their heads in the sand. Or worse, those who refuse to see any difficulties ahead because, well, you know, Jezebel “has a point.” Trouble will come and, indeed, has always come for the people of God.

For that reason, we need deep, biblical wisdom like that of the book of 1 & 2 Kings, read with an eye to the horizon. As Paul says, “Now these things happened to them as an example, but they were written down for our instruction, on whom the end of the ages has come” (1 Corinthians 10:11). These things happened back then and there, but since the patterns of the world’s sin repeat in history, these texts are still used by the Spirit of God “for teaching, for reproof, for correction, and for training in righteousness, that the man of God may be complete, equipped for every good work” (2 Timothy 3:16-17).

Speaking to the spiritual depthlessness with which his contemporaries lived, Thoreau wrote in Walden of the tragedy that “the mass of men lead lives of quiet desperation.” They give in, they resign themselves to life as it is, no adventure, no true life–mere amusements only. Despair becomes a fixed underlying atmosphere of the heart.

The unfortunate reality is that Thoreau’s description could easily be applied to contemporary American Christians with little modification. You see, most of them will live the majority of their lives with a limp.

A limp? What do I mean by that? 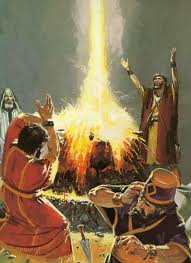 Can I just say right now how much I love cheesy, bible drawings? Great times.

Theological Dance-off
One of my favorite passages in Scripture is the story of Elijah and the prophets of Baal at Mt. Carmel found in 1 Kings 18. In the ultimate theological showdown Elijah faces off against the false prophets in the Biblical equivalent of a dance-off, pitting YHWH against the false gods of the Canaanites, the Baals introduced by Queen Jezebel, in a literal trial by fire. Elijah would pray to YHWH and the false prophets would pray to the Baals, and whoever’s deity answered with fire to consume the sacrifice offered was the true God.

Aside from the sheer awesomeness of God administering a raw beat-down of a rival deity, what’s going on in the passage? Why did God feel it necessary to display himself in this way? Why set up a contest with non-existent gods? Why all the fireworks? What does he have to prove? Elijah’s question to the people reveals YHWH’s motive:

And Elijah came near to all the people and said, “How long will you go limping between two different opinions? If the LORD is God, follow him; but if Baal, then follow him.” And the people did not answer him a word. (1 Kings 18:21)

See, the Israelites had a limp. Israel, as it often would in its history, had fallen into the worship of false gods. They were turning away from YHWH, the true God, and had begun to give themselves to gods that weren’t really gods, who hadn’t done anything for them, certainly hadn’t saved them, redeemed them out of slavery from Egypt, and wouldn’t be of any use to them in the future. As Elijah put it, they were “limping between two different opinions.” Elijah’s challenge was a call to make up their minds, make a decision and whole-heartedly give themselves over.

Life with a Limp
When you live your life wavering between two different opinions, you live it with a limp. You can never take a solid step–you’re always teetering, unsteady in your choices. It’s like someone who can’t decide whether or not to commit to a relationship. For every little word or date or occasion there’s tons of analysis as to the implications and so firm action is rarely taken. What’s more, the fruits of a decision are not enjoyed either–you get none of the peace of solidly saying nor, and none of the joy of fully being with someone–this is, in fact, what struck me about the passage.

I remember listening to a Matt Chandler sermon where he pointed out that for a lot of Christians, life is lived between sin and God. They’re Christians but their hearts drawn towards sin and so they never fully chase after God and enjoy the fruit of a full relationship with him. At the same time, they’re too scared to chase after sin and at least enjoy it for a while before it destroys them. They enjoy neither and live basically fruitless lives.

No wonder so many of us wonder whether the Gospel is real. We live our lives half-chasing everything else, never fully giving ourselves over to Christ but never quite chasing what we really want either. Our home is in the muddled middle of spiritual mediocrity. Don’t misunderstand me here–I am not talking about being some super-Christian who out-preaches Billy Graham, out-serves Mother Theresa, and makes Ignatius of Loyola look like a spiritual slouch. I am talking about living each day having turned ourselves over to Christ; waking up with his glory and grace at the forefront of our minds, not that job promotion, or my own wants. I am talking about time in Scripture that’s about knowing and communing with Jesus, not a ritual to secure the blessings of all green lights on the way to work. I am talking about a prayer-life focused on the Kingdom, not simply achieving the American dream. I’m talking about a church-life that is more than just showing up for an hour to “get fed” and roll out, but an active involvement in the community of God because we know that’s where life-change happens–in the worshipping community. I’m talking about all of these things and more.

The Choice
The point is you’ll never chase these things if your heart is caught between God and money, God and sex, God and comfort, God and anything else. You will not run. You will not experience the true freedom God has for his children. You will simply limp through life wishing there was something more and bitterly resenting God because you’re too scared to chase it.

The call now is the same as it was then: Quit limping between the LORD or the Baals–choose Christ.