Reformed Retrieval: The Theology of the Westminster Standards by J.V. Fesko 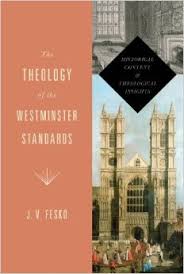 After two and half years of writing on basically Reformed theology, you’d think I would have moved on from “Reformed-ish” to just straight “Reformed”, right? That’s the joke a couple of online friends of mine have made. As I’ve said before, though, the “ish” on the end of “Reformed” isn’t about being a unique, theological snowflake, autonomously standing apart from the rest, in my wise aloofness. Rather, it’s intended to communicate a certain level of humility, an acknowledgment that I’m still in process, in via, on the way to being “Reformed.” I’m an avid novice, but a novice nonetheless.

That’s why I have a particular appreciation for works like J.V. Fesko’s new book The Theology of the Westminster Standards: Historical Context and Theological Insights. After writing a quick piece on the theology of Scripture and revelation according to the first chapter of the Westminster Confession, I was gifted a copy of Fesko’s work (w/ no obligation for favorable review, etc), and after a couple of months I got to work on it. I wasn’t sure what to expect, but when I jumped in, I was pleasantly surprised and I managed to blow through it in about a week even though it’s not a very small volume (roughly 400 pages). Aside from my interest in the subject matter, Fesko’s prose is clean and his arguments are strong and clear.

In this work, Fesko, academic dean and professor of systematic and historical theology at Westminster Theological Seminary, Escondido California, attempts to give a historical grounding for understanding the theology of the Westminster Standards (Westminster Confession of Faith, Larger Catechism, Shorter Catechism). As the confessional standards for most Presbyterian churches for hundreds of years, and the foundation for particular Baptist confessions as well, they have formed something of a standard touchpoint for confessional Reformed theology since their adoption. The problem is that while they’ve been widely read and commented on, Fesko contends that there have been a number of confusions surrounding the theology espoused in the Standards due to the fact that they have typically been read with little attention paid to the historical and theological context. Fesko aims to fill that gap by drawing on recent historical studies and the wealth of new material made available to historical researchers through the digitizing of a plethora of historical sources, in order to shed new light on passages long buried under the weight of anachronism and assumption.

Without going through a full review, I’d like to just highlight a few things to note about this enjoyed.

First, this is not a straightforward commentary on the Confession or the Catechisms. While some chapters are devoted to key chapters in the Confession, often the chapters are on broader theological issues that affect multiple sections in the Confession. On that same note, this is not an introductory theology textbook. Fesko assumes that you have some familiarity with basic Christian theology and even Reformed theology in general. In other words, this is not meant to be handed out to some fresh, new Christian looking to learn the faith for the first time. This is for pastors, seminary students, and serious students of theology.

That said, I actually enjoyed Fesko’s organization because it allowed him to treat the documents in a more holistic fashion, going on at length in discussing some of the more disputed theological issues.

For instance, I appreciated his handling of the Confession’s relationship to the question of particular atonement, or hypothetical universalism. Often-times confused with Amyraldianism, some English theologians like John Davenant put forward a different construction of the decrees that affirmed both the particularity of election while maintaining the universality of the atonement in a way different than what is typically called Amyraldianism. I’m not saying I agree with it, nor that Fesko does, but he presents the disputes in a clear, fair-handed matter that gives the reader a better impression of the broadness of the theological climate at the Westminster Assembly. (For another recent treatment, Oliver Crisp’s Deviant Calvinism has a couple helpful chapters on it.)

He does the same thing for the issue of the way the Reformed divines understood the covenant of nature, covenant of grace, and the Mosaic dispensation. Fesko clearly and carefully sets out the variety of views on the subject (somewhere between 3-5 types), while indicating those views which were comfortably held by those who affirmed the documents, and those that were specifically ruled out.

On that note, one emphasis of Fesko’s that I appreciated was the theological diversity of the framers of the Westminster Standards. Reading the Confessions and Catechisms in light of recent theology, it’s easy to take a more narrow view of things, but upon inspection of the minutes of the Assembly, as well as the works of the various theologians cited and in attendance, you begin to appreciate just how diverse things really were, as well as the surprising latitude that was ensconced in the documents at key points.

Fesko also reminds us of the catholicity of the Westminster divines. Actually, one of the more interesting things he does is repeatedly list the various sources cited either in the minutes or the works of the various theologians. The Confession isn’t simply Calvin-redux. Though Calvin was important, the divines quote a bevy of contemporary Reformed, Lutheran, Patristic, and even Medieval and Catholic sources. Bullinger, Bucer, and Calvin feature in the footnotes alongside Aquinas and Ockham, Irenaeus, Origen, and Augustine. To be Reformed according to the Standards is not to be parochial. Also, on this point, for those familiar with the arguments of T.F. Torrance and others in the “Calvin against the Calvinists” schools, nor is this a simple degradation or deviation from Calvin’s Christ-centered theology. Fesko’s section demonstrating that that ordo has not overwhelmed the importance of “union with Christ” was very helfpul on this point.

I could go on from there. But, it should be clear by now that this is a very helpful resource for studying and retrieving the theology of the Westminster Standards. Also, for anyone looking to do further digging, either in the secondary, or the primary literature, Fesko has included a very helpful annotated bibliography on top of his extensive footnotes.